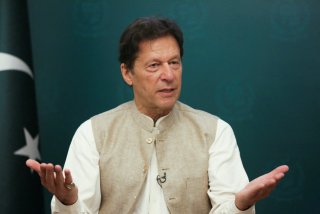 The Pakistani parliament voted in favor of a no-confidence vote against Prime Minister Imran Khan on Sunday, stripping him of his office and paving the way for lawmakers to appoint an acting replacement until the country’s next elections in 2023.

The vote took place roughly one week after Khan had attempted to prevent it by preemptively declaring the dissolution of parliament, leading to a brief constitutional crisis. The crisis was quickly ended by the Supreme Court, which ruled on Thursday that Khan’s action had been unconstitutional and ordered the parliament re-formed.

The no-confidence motion, the first successful vote of its kind in Pakistan’s history, was passed with 174 votes in favor, or slightly more than half of the 342-seat parliament. Prior to its approval, the speaker and deputy speaker of parliament, both Khan allies, resigned rather than preside over the vote.

Khan maintained during the proceedings that the no-confidence vote had been orchestrated by the United States government as recrimination for his close ties with China and Russia and his refusal to participate in the ongoing Western sanctions regime against Moscow. In the run-up to the vote, the prime minister had staged massive rallies in Pakistan’s major cities, attempting to bolster public support and warn swing votes in parliament that their actions would result in future political consequences.

However, Khan’s opposition in parliament, which gained the majority in 2022 after Khan’s governing coalition splintered, alleged that opposition to his continued rule had come from dissatisfaction over Khan’s economic policies during the COVID-19 pandemic. They also cited his contentious foreign policy, which had resulted in a major escalation with India, Pakistan’s neighbor and historic adversary, in 2019.

Western observers have also cited Khan’s sometimes difficult relationship with the country’s military, which continues to play a major role in Pakistani politics and has periodically overthrown civilian governments throughout Pakistan’s history. Although spokesmen for the armed forces denied that it opposed Khan, observers cited public clashes over high-level military appointments in recent years as evidence of a rupture.

The movement to oust Khan was led by the country’s two historic major parties, the liberal Pakistan Peoples Party (PPP) and the conservative Pakistan Muslim League-Nawaz (PML-N). Local sources have suggested that the two parties and their allies will most likely appoint PML-N member Shehbaz Sharif, the former Leader of the Opposition and the younger brother of former prime minister Nawaz Sharif, to serve the remainder of Khan’s term.

In Pakistan’s seventy-five-year history, no prime minister has yet served a full term in office.