Unrest in Pakistan as Khan Supporters March on Capital 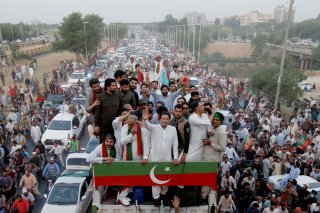 Violence erupted in Pakistan on Wednesday after supporters of deposed Prime Minister Imran Khan, who was forced from office in April, marched on Islamabad to demand the government’s resignation and a new round of elections—leading to clashes with security forces manning roadblocks on the highways leading to the capital.

In the run-up to Khan’s planned rally in Islamabad—a rally that the city’s leaders have forbidden—the former prime minister’s supporters have dismantled roadblocks and engaged in repeated clashes with Pakistani security forces. Protests took place along the road to Islamabad and simultaneously in the city of Lahore, the capital of Pakistan’s Punjab province. In Lahore, police dispersed hundreds of supporters of Khan’s “Pakistan Tehreek-i-Insaf” (PTI) party using tear gas after they attempted to remove roadblocks from the streets. Many protesters were arrested after throwing rocks and tear gas canisters at security forces. The PTI later claimed that overnight raids resulted in the arrest of at least 1,000 of its members.

Although the Pakistani government attempted to ban Khan’s upcoming rally after a policeman was killed by a PTI member during one of the raids, the former prime minister has voiced his intention to hold it anyway, “at any cost.” Khan called on his supporters to dismantle government blockades along the march, which he characterized as a “defining moment” in the country’s history.

Khan’s march began in Peshawar, the capital of Pakistan’s tumultuous northwestern Khyber Pakhtunkhwa province, and proceeded across a fortified bridge to Islamabad. Pakistani interior minister Rana Sanaullah, a member of the governing Pakistan Muslim League-Nawaz (PML-N) party, indicated that the law forbids the rally in Islamabad, and Khan would be subject to arrest if he attempted to hold it. However, the Pakistani constitution allows for peaceful protests, and the country’s Supreme Court, which ruled in April that the no-confidence vote expelling Khan from office could proceed, is currently hearing a petition calling for the removal of the blockades. Pakistani authorities have suggested that the rally could be permitted if Khan could provide assurances that it would remain peaceful.

Pakistan’s next elections are scheduled to occur in 2023, and Khan has vowed to contest them to regain his prior position. The former prime minister has accused his opponents, including his successor Shehbaz Sharif, of conspiring with the United States to remove him from office. The PLM-N and its largest coalition partner, the center-left “Pakistan People’s Party” (PPP), dismissed these charges as preposterous.