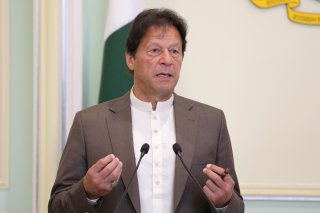 A Pakistani court ordered the country’s prosecutors to drop a set of pending terrorism charges against former Prime Minister Imran Khan on Monday, weeks after the politician was charged for threatening a female judge and senior officials within the country’s police force.

The Islamabad High Court in Pakistan’s capital claimed that Khan’s remarks did not meet the threshold to be charged under the country’s Anti-Terrorism Act, legislation broadly prohibiting domestic anti-government activity. A conviction could have led to a life sentence, although many commentators observed after the filing of charges that the legal case against him was likely to fail before reaching that stage.

Khan was charged under the act for comments he made at a rally in Islamabad on August 20, in which he threatened to take an unspecified “action” against the judge overseeing the criminal case against Shahbaz Gill, one of the prime minister’s aides, if she failed to release him. That judge, Zeba Chaudhry, initially approved Gill’s two-day detention; during his detention, the aide alleged that he had been beaten, leading to anger against Chaudhry among Khan’s supporters.

Following his speech, the country’s press authority initially required that all of Khan’s speeches include a time delay so that government censors could block objectionable content. Later in the week, the country’s prosecutors announced that he would also be charged under the Anti-Terrorism Act.

Khan denied that his words in the speech had been intended as a threat. Although the former prime minister was charged with violating the law, he was never formally arrested, as he was granted interim bail until September 20.

At a hearing concerning the charges, prosecutor Raja Abbasi claimed that a police investigation into Khan’s remarks found that they had been “threatening,” warranting the terrorism charges. A two-member bench led by Islamabad High Court Chief Justice Athar Minallah disagreed, dismissing the terrorism charges. However, the court did not dismiss the legal case against Khan altogether, leaving the possibility that he might be charged with a lesser offense in connection to the remarks.

The leader of the populist “Pakistan Tehreek-e-Insaf” (PTI) party, Khan, served as prime minister from 2018 until April 2022, when he was removed from office via a no-confidence vote. Following his dismissal, Khan alleged that he had been the victim of a conspiracy to unseat him, including opposition lawmakers, the Pakistani armed forces, and the United States government.

All three groups have dismissed Khan’s allegations, but the former prime minister has continued to hold rallies throughout the country and call for early elections.