Imran Khan Stays Out of Jail, For Now 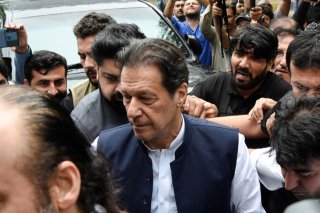 A court in Pakistan approved temporary bail for former prime minister Imran Khan, who was charged under the country’s anti-terrorism law earlier in the week after he allegedly threatened Pakistani police officers and a judge overseeing his aide’s trial.

The judge in Khan’s case released the former leader until September 1, ordering police not to arrest him until that date. By September 1, Khan is required to seek an extension to his bail to remain free—a step that he and his lawyers are likely to take.

Khan, who was dramatically ousted from office in April after several of his supporters defected from his coalition to oppose him in a no-confidence vote, has faced a litany of legal challenges since his fall from power. In addition to the terrorism charge, the former prime minister is being investigated for illegally collecting funds for his party from Pakistani expatriates in the United States and Europe through concealed bank accounts and other money laundering charges. If convicted, the former prime minister could be barred from running in future elections and could face prison time.

Khan has remained extremely active since his removal, insisting that the no-confidence vote was part of a plot between the country’s military and the United States. Although the Pakistani Army and the U.S. Embassy in Islamabad have denied Khan’s allegations, he has continued to hold rallies and urge protests against incumbent Prime Minister Shehbaz Sharif. Despite his removal from office, Khan remains highly popular within Pakistan, and his party later won a special election in Pakistan’s most populous Punjab province.

However, when Khan’s aide Shahbaz Gill urged the rank and file of the Pakistani armed forces to rise up against their commanders last week, he was arrested for attempting to incite a mutiny. Khan declared after Gill’s arrest that he and his supporters would “take action” against the judge presiding over Gill’s trial, a statement that initially led Pakistan’s media regulator to block his speeches from live satellite broadcasts and later led to his arrest.

Outside of the court in Islamabad, Khan claimed that the proceedings had been ordered by the Pakistani government, which feared that he would regain power following the country’s next elections.

“Due to that fear, they are looking for technical knockouts,” he claimed, accusing Pakistani leaders of “making a mockery of the country.”