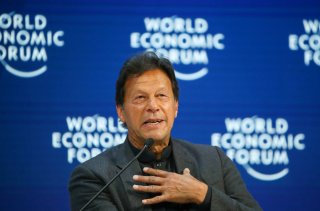 The Pakistan Electronic Media Regulatory Authority, or PEMRA, announced on Sunday that Pakistani satellite networks would no longer be allowed to provide live coverage of former Prime Minister Imran Khan’s speeches. The ruling came one day after the former leader and head of the populist Pakistan Tehreek-e-Insaf (PTI) political party directed harsh remarks toward the government and threatened to sue several high-level officials over the recent arrest of his assistant, Shahbaz Gill, on sedition charges.

“It has been observed that Mr. Imran Khan … in his speeches/statements is continuously alleging state institutions by leveling baseless allegations and spreading hate speech through his provocative statements against state institutions and officers,” the PEMRA statement read. It claimed that the former prime minister’s remarks were “prejudicial to the maintenance of law and order and … likely to disturb public peace and tranquility,” and suggested that Khan’s speeches had violated the constitution and the country’s media law, which prohibits the spreading of false information.

“In view of the above mentioned background and reasons … [the PEMRA Chairman] hereby prohibits broadcast of live speech of Imran Khan on all satellite TV channels with immediate effect,” the statement read. It claimed that the speeches could still be televised, but insisted that broadcasters include a time delay so that censors could block objectionable content.

The Pakistan Tehreek-e-Insaf party, which Khan leads, reacted with hostility to the announcement, accusing PEMRA of violating the Pakistani constitution’s guarantee of freedom of expression. The party’s official Twitter account claimed that the government of Prime Minister Shehbaz Sharif had already “lost the battle” of ideas with Khan and had therefore resorted to “fascism” in order to silence him.

The former prime minister’s rally on August 20 was organized by the PTI in protest of Gill’s arrest. At the rally, Khan described Sharif’s government as an “imported regime,” repeating an earlier allegation that Sharif and other opposition lawmakers had colluded with the United States to engineer his fall from power. He also offered veiled criticism of the Pakistani armed forces, which he had earlier accused of conspiring against him.

Although the Pakistan Army did not respond to Khan’s allegations, the country’s other political parties—including the ruling Pakistan Muslim League-Nawaz (PML-N) and Pakistan People’s Party (PPP) have each asked the judiciary to take legal action against Khan for attempting to intimidate police officers and a female judge.