Is a Geostrategic Shift in the Middle East in the Offing? 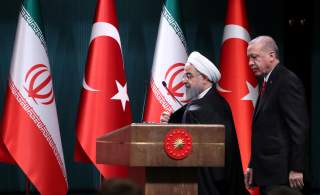 On the eve of the short-lived Arab Spring in January 2011 I wrote a story which argued that the “center of gravity in the Middle East has shifted dramatically in the past few decades from the Arab heartland comprising Egypt and the Fertile Crescent to what was once considered the non-Arab periphery—Turkey and Iran.” That statement has continued to hold true despite the ups and downs in the regional politics of the Middle East.  The moribund nature of Arab politics and the perpetuation of autocratic and kleptocratic rule have contributed in large measure to the diminution in the regional role of major Arab states such as Egypt. The civil wars following the Arab Spring have torn several Arab countries apart and even created failed states such as Syria, Libya, and Yemen. These wars have further marginalized the Arab world. Even Saudi Arabia, despite its fabulous oil wealth, is unable to exert adequate influence in the region because of its manifest dependence for security on the United States and the arrogant and eccentric nature of its regime.

In short, Turkey and Iran continue to be the pivotal states in the volatile region around and much of the security dynamics of Middle East continues to revolve around these two countries regardless of the nature of their regimes. No stable security order in the region can be built without the participation of Ankara and Tehran. This is a lesson that Washington has still to learn.

It is essential, therefore, that American relations with Iran and Turkey remain relatively harmonious if the United States is to achieve its strategic objectives in the region, which includes preventing the growing influence that rival powers have in the Middle East. This applies especially to very visible increase in Russian influence, which cannot be checked without the cooperation of Tehran and Ankara. Unfortunately, Washington has done exactly the opposite by alienating Tehran for the last four decades and Ankara during the past several years.

Iranian-American relations have been hostile since the revolution of 1979 for reasons that go back to the CIA engineered coup against Mohammad Mossadegh, Iran’s first elected prime minister, in 1953 and Washington’s support to the autocratic rule of the Shah. The hostage crisis soon after the revolution when government-supported students took hostage fifty-two American diplomats and held them for 444 days, which brought relations to their nadir. America’s relations with Iran remained frozen until the signing of the nuclear deal between the P5+1 and Iran in July 2015. The agreement seemed to signal a thaw in U.S.-Iran relations. There was much hope that both parties would use the JCPOA as a stepping-stone to return their relationship to normality.

However, the election of President Donald Trump accompanied by the escalation in anti-Iranian rhetoric and the subsequent withdrawal of the United States from the nuclear deal belied these hopes. The unilateral imposition of economic sanctions on Tehran by the Trump administration culminated in the announcement on April 22 that Washington would not renew the sanction waivers granted to eight of the leading importers of Iranian oil. This tactic was aimed at reducing Iranian oil exports to zero, bringing the Iranian economy to its knees, and forcing the Iranian leadership either to totally succumb to American demands or withdraw from the JCPOA. It also provided the United States and Israel the excuse to launch air attacks on its nuclear facilities.

Many observers saw this as the prelude to an all-out war—especially with National Security Advisor John Bolton, a major advocate of the invasion of Iraq, dictating American policy toward Iran and shaping it in the mold of the failed Iraqi policy. As Paul Pillar has pointed out, “The strategy has been to try to pressure and goad Iran into doing something—anything—that could be construed as a casus belli.” The New York Times has reported that the White House is reviewing military plans that would entail deploying 120,000 American troops against Iran. The echoes of the Iraq war can now be clearly heard. The number of troops suggested approach those that were deployed against Iraq in 2003.

So far Iran has not fully risen to the bait, but there are indications that the Rouhani government, under pressure from hardliners in Tehran, could be moving in this direction. Recently, Tehran has notified its five remaining partners in the JCPOA that come July Iran will begin enriching uranium beyond the levels laid out in the nuclear agreement and resume the production of nuclear centrifuges unless the five remaining members of the JCPOA could assure Iran that it “could ‘reap our benefits’ under the nuclear accord, by making up for lost oil revenues and allowing the country back into the international financial system.” It is obvious that the European powers will not be able to meet Iranian demands given the intertwined nature of American and European economies that would make meeting those demands cost prohibitive. This is likely to force the Iranian regime to go through with its threat regarding enrichment and centrifuges and set the stage for a full-fledged confrontation between Washington and Tehran.

Recent reports of attacks on four oil vessels—two belonging to Saudi Arabia and one each to Norway and the UAE—close to the Straits of Hormuz and attributed to pro-Iranian elements have further raised the temperature in the Gulf. These attacks have coincided with the U.S. decision to send an aircraft carrier, an anti-missile battery, and additional bombers to the Gulf, thus signaling further escalation in its confrontation with Iran.

The major beneficiary of this escalation in American-Iranian tensions is Russia. It has implicitly supported Iran’s announcement about partially withdrawing from the JCPOA by holding the United States responsible for the current situation because of what Russian foreign minister Sergey Lavrov called its “irresponsible behavior.” It has also criticized the European signatories of the JCPOA for not fulfilling their obligations under the nuclear deal. Despite some differences between them, Russia has been working in tandem with Iran in Syria. Russian air power and the ground forces supplied by Iran and its ally Hezbollah have been principally responsible for Assad’s near victory in the Syrian civil war. The current belligerent American policy toward Iran is pushing Tehran further into Russian arms and providing the latter with the opportunity to consolidate its relationship with one of the two pivotal powers in the Middle East. This is likely to have a long-lasting effect on the geopolitics of the region.

American policy toward Turkey is pretty much a repetition of the Iranian scenario in terms of its long-term consequences although it is vastly different in terms of detail. Turkey has been a traditional Western ally and a member of NATO and for a long time good relations with the United States formed the bedrock of its foreign policy. However, the last few years have seen a marked deterioration in these relations due to multiple factors.

While initially the United States and Turkey were on the same side of the civil war in Syria, this changed dramatically with the U.S. decision to arm and support the Kurdish YPG in the fight against the Islamic State. It helped the YPG to carve out an autonomous Kurdish enclave in Syria close to the Turkish border. This development has irked Ankara no end as the latter considers the YPG an extension of the secessionist PKK that has been waging a war against the Turkish state for decades. Turkish governments of all hues have considered the Kurdish demand for autonomy a mortal threat to the unity of the Turkish state and, therefore, its principal security concern. Turkey is unwilling to accept the existence of a Kurdish autonomous entity in Syria on its borders as it fears that it would give a fillip to Kurdish secessionist tendencies within Turkey. The issue of American support to the YPG has thus become a zero-sum game between Ankara and Washington and embittered relations between them.

Turkey’s decision to buy S-400 anti-missile defense systems from Russia has further soured relations between the two NATO allies. Turkey considers it a sovereign decision necessary to enhance its security, while the United States sees it as undermining NATO defense capabilities, especially since it will require that the NATO Identification Friend and Foe (IFF) system be installed on the systems acquired from Russia. The United States believes that this will compromise NATO security by revealing important defense secrets to its potential adversary, Russia. Washington is, therefore, poised to invoke the Countering America’s Adversaries Through Sanctions Act (CAATSA) of 2017, which will bar various Turkish governmental institutions and defense companies from working with their American counterparts. Washington has also made it clear that the procurement of the S-400 systems will lead to Turkey being excluded from the F-35 program. The F-35 jets are the next generation strike aircraft to be introduced into the air forces of nine NATO countries. Consequently, the Turkish government is signaling that it is likely to acquire Russian fighter aircraft to fill the gap left by the nonprocurement of F-35 fighters thus further complicating the task of NATO interoperability.