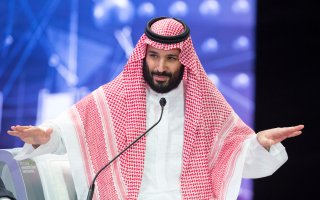 Saudi Arabia is planning to build the world’s largest building in Neom, the proposed “smart city” megaproject in Saudi Arabia’s northwestern Tabuk region, according to design documents obtained by the Wall Street Journal.

The proposed structure, called the “Mirror Line,” is intended to be created as a pair of glass buildings at least 1,600 feet high—only two hundred feet shorter than One World Trade Center, the tallest building in the United States—and running for seventy-five miles from the Red Sea into inland Saudi Arabia. According to the design specifications, the two buildings will share walkways and a high-speed underground train capable of carrying residents from one end of the building to the other in twenty minutes. The structure is projected to house as many as five million people upon completion. It includes other proposed areas, such as zones for farming and a sports stadium to be positioned 1,000 feet above the ground.

The Mirror Line is intended to be the centerpiece of Neom, the pet project of Saudi crown prince Mohammed bin Salman, or MBS. The rest of the city has been estimated to cost $500 billion to construct; Saudi officials have publicly stated that the construction will be complete by 2030, although more sober assessments from outside sources have suggested that full completion of the project could not be achieved until 2070. Although MBS has acknowledged that this plan represents a major strain on Saudi Arabia’s economy, he has emphasized that some of the city could be paid for through private financing, announcing on Tuesday that Riyadh would raise an estimated 500 billion Saudi riyals, or roughly $133 billion, by 2027 for the city’s construction.

The crown prince also claimed that Neom would rely on government financing until 2030 but would be financially independent and self-sustaining after that date. He added that the completion of Neom would add one trillion riyals, or $266 billion, to Saudi Arabia’s Tadawul stock exchange. The city’s development has so far been financed through a joint-stock company with majority government ownership.

Although Saudi officials have publicly maintained high hopes for Neom’s constructions, the country has struggled with prior megaprojects. The “King Abdullah Economic City,” initiated in western Saudi Arabia by former King Abdullah in 2005, was intended to house two million people and create one million jobs by 2020, but today has fewer than 10,000 residents.