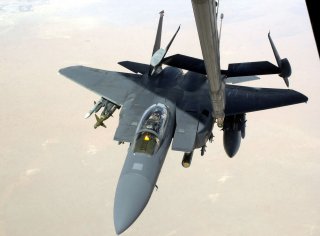 Republican lawmakers defended arms sales to Saudi Arabia as they played up the “massive geostrategic threat” posed by Iran at a House Foreign Affairs Committee hearing.

U.S. arms sales to Saudi Arabia are under fire once again as Democrats accuse the Trump administration of covering up an investigation into last year’s U.S.-Saudi weapons contract. But Republicans argued that the Arab kingdom needs all the help it can get against its Iranian rivals.

“Some of our partners in the region are far from perfect,” Rep. Joe Wilson (R–S.C.) acknowledged at the hearing on Tuesday, but “we have real partners and friends in the region.”

He argued that the arms sales help create “peace through strength” and deter “regimes that explicitly seek to to kill Americans and destroy our way of life and our important allies, such as Israel.”

Saudi Arabia is currently fighting a bloody war in Yemen against the Houthi rebels, a movement that is partially backed by Iran.

Democrats and some Republicans have tried to end U.S. support for the Saudi-led campaign, which has killed over 230,000 people since 2015, according to the United Nations.

Rep. Ted Lieu (D–Calif.) questioned whether Saudi Arabia could be trusted with U.S. weapons, given its behavior in Yemen.

He claimed that a deadly Saudi airstrike against a wedding two years ago “looks like war crimes to me.”

The Obama administration had determined that actions like this were the result of “incompetence” rather than intentional war crimes, testified Andrew Exum, former Deputy Assistant Secretary of Defense for Middle East Policy.

Bradley Bowman, another witness from the Foundation for Defense of Democracies, defended Saudi Arabia’s campaign.

“Before we sit here in the United States and criticize Saudi Arabia too much, let’s imagine we had a terrorist group on our southern border shooting missiles at us,” he argued.

Bowman said that “Iran is the problem” in Yemen, and peace would be possible if Iranian interference ended.

But retired Lt. Col. Jodi VIttori, a witness from the Carnegie Endowment for International Peace, pointed out that America’s enemies are found on both sides of the war in Yemen.

American armored vehicles that were sold to the Saudi-led coalition later ended up in the hands of Al Qaeda, she emphasized.

And another lawmaker questioned whether Saudi Arabia was a useful ally against Iran to begin with.

“If there were to be a real military confrontation with Iran in the Gulf…would we trust the Saudi s to use [U.S.-made] weapons or would we do it ourselves?” Rep. Tom Malinowski (D–N.J.) asked.

“We’d mostly ask our partners to stay out of the way, to be frank,” Exum responded.