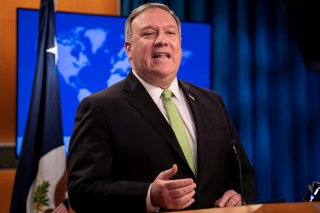 President Donald Trump dismissed Linick from his role as the State Department’s top investigator on Pompeo’s recommendation last month, prompting accusations of a cover-up from Democratic members of Congress.

Linick had been working on several investigations into the Trump administration, including a probe into an “emergency” sale of arms to the Saudi government, according to a transcript of closed-door testimony released on Wednesday morning.

He said that Undersecretary of State for Management Brian Bulatao was “trying to have us not work on that matter, stating that it was a policy matter and it was not within our jurisdiction to look at it. So that was sort of the nature of that attempt to bully.”

Bulatao is a personal friend of Pompeo from the U.S. Military Academy at West Point. Pompeo had brought Bulatao on as the CIA’s Chief Operation Officer after becoming CIA director, and then hired him as Undersecretary of State once Pompeo ascended to the head of State Department.

Linick claimed that both Bulatao and State Department Legal Advisor Marik String met with him to argue that the Inspector General “shouldn’t be doing the work” of investigating the arms sale.

The then-Inspector General, however, argued that he would fulfill a legal duty to “review implementation of policy, not to judge whether it’s a good policy or a bad policy….but whether or not the policy is being carried out in accordance with the regs—the regulations and the law.”

Lawmakers had tried to delay weapons sales to Saudi Arabia in early 2019, but the Trump administration declared a state of emergency in May 2019 to push through an $8 billion deal to several different Middle Eastern monarchies without allowing Congress to review it.

“These sales will support our allies, enhance Middle East stability, and help these nations to deter and defend themselves from the Islamic Republic of Iran,” Pompeo wrote at the time. “These national security concerns have been exacerbated by many months of Congressional delay in addressing these critical requirements, and have called into doubt our reliability as a provider of defense capabilities, opening opportunities for U.S. adversaries to exploit.”

Members of Congress then asked Linick to investigate whether the emergency declaration was legal.

Linick told Congress in his latest testimony that he was fired one week after the House Foreign Affairs Committee asked for an update on the investigation.

Pompeo defended the decision to fire Linick in a press conference in May, saying that he had “no sense of what investigations were taking place inside the Inspector General’s Office.”

He admitted to answering written questions—reportedly about the Saudi arms deal—but claimed that he doesn’t “know the scope of that investigation other than what I have seen from the nature of the questions.”

Linick had also been conducting an investigation into Pompeo’s alleged misuse of State Department staffers for personal chores.

“I’ve seen the various stories that, like, someone was walking my dog to sell arms to my dry cleaner,” Pompeo said in May. “I mean, it’s all just crazy. It’s all crazy stuff.”