How to Combat Anti-Israeli Hate on College Campuses 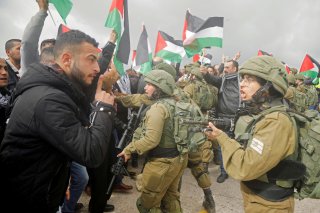 Located halfway around the world and roughly the same size as New Jersey, the tiny Jewish state of Israel has increasingly emerged as yet another issue dividing America’s fraught political discourse. Whether in the halls of a “Squad”-stained Congress or in the myriad university classrooms debating whether to lend support to the malicious, anti-Semitic Boycott, Divestment, and Sanctions (BDS) campaign, Israel is no longer the unifying political issue that it once was.

Reputable opinion polling still evinces an American electorate that, by and large, still overwhelmingly supports Israel. But there are troublesome indicators in the offing. The American university campus, in particular, has evolved into a hotbed of anti-Israel activism. Led by rabble-rousing student organizations such as Students for Justice in Palestine (SJP) and Jewish Voice for Peace (JVP), groups schooled in noxious harassment and intimidation techniques, a scant mention of the word “Israel” on campus today frequently elicits hair-pulling hysteria and the ugliest of ad hominem ripostes.

At the University of Chicago, where I went to law school, I have seen the contorted, spittle-flying faces of those provocateurs who would try to shout down pro-Israel speakers with bellows of “free, free Palestine.” I have seen it in my daily participation in our rancorous public square, where Israel’s purported “occupier” status is accepted, no questions asked, by so much of the blue-checkmark Twitterati. Lay media style guides are often all too happy to oblige, no questions asked; entire organizations exist solely to combat anti-Israel bias pervading institutions as wide-ranging as the mainstream media to Wikipedia, the highly-trafficked free online database.

The rise of the on-campus anti-Israel movement is multifaceted, but one feature is all too common: Anti-Zionists and BDS supporters who tar Israel as an illegal “occupier” and/or an “apartheid” nation. That smear tacitly assumes a specific understanding of international law—an understanding that is not only misleading but is provably false under well-established principles of international law. In reality, the alleged crime of Israeli “occupation” in Judea and Samaria is all based on a lie. In fact, as legal scholars Eugene Kontorovich and Avi Bell have previously and persuasively demonstrated, Israel has the best legal claim to disputed Judea and Samaria.

First, a necessary disclaimer. When people, especially young people on the American university campus, hear the phrase “international law,” the picture they often conjure up is a body of gavel-hammering judges in an eminent tribunal applying a settled code of rules similar to the centuries-old Anglo-American legal tradition. That picture could not be further from reality. What the legal profession calls “customary international law,” to the extent the word “law” is even accurate to describe a body of norms and customs that lack actionable enforcement measures, is mostly composed of a narrow set of principles about which countries have reached a near-consensus over the course of centuries. It is worth noting that some people also think of treaties and the like as a different type of international law—a type that, at first, may resemble laws passed by a national legislature, but in actuality are more like multi-party contracts, except without a court to enforce them. “International law” is something utterly unlike an enforceable and cognizable legal code of a first-world nation-state. Still, it’s important to know these legal principles anyway because, for better or worse, they matter on campus—and, more generally, in the public battle of ideas.

The venerable principle of international law known as uti possidetis juris, Latin for “as you possess under law,” is derived from the Latin expression uti possidetis, ita possideatis, meaning “may you continue to possess such as you do possess.” The principle reflects the normative values of finality and stability in border-setting and is most often invoked and applied to determine post-colonial borders. Its first modern use, in the context of determining Latin American national boundaries following independence from Spain, predates the modern Israeli-Palestinian conflict by well over a century. It has also been a legal centerpiece of African continental decolonization; as the International Court of Justice put it in a 1986 judgment with respect to a border dispute between Burkina Faso and Mali, “by becoming independent, a new State acquires sovereignty with the territorial base and boundaries left to it by the colonial power.” The principle has also featured prominently in the European theater, in the context of the dissolutions of the Soviet Union, Czechoslovakia, and Yugoslavia.

Following the Romans’ destruction of the Second Temple in 70 C.E. and the commencement of the Jewish Diaspora, the Land of Israel—Eretz Yisrael, in Hebrew—frequently changed legal hands for nearly two millennia. For centuries leading up to World War I, the land was just a small part of the sprawling Ottoman Empire. The Balfour Declaration of 1917, thirteen years after the death of Zionist visionary Theodor Herzl, represented the first modern expression of Zionist support by a major political power (Britain). The Balfour Declaration was also indispensable in bringing about the Mandate for Palestine, based on Article XXII of the Covenant of the League of Nations and assigned to Britain at the San Remo Conference of 1920, which served as the instrument of international law intended to effectuate the Declaration’s call for a “national home for the Jewish people.” The Mandate for Palestine was but one of many “mandates.” After World War I, the international community, led by the League of Nations, decided the former German and Ottoman territories ceded by military defeat were not established enough to govern themselves and should be placed under the control of other nations. All other Mandate successor states follow the borders of the Mandate, any lumping in of dissatisfied minority groups notwithstanding.

Britain was chosen to administer the Mandate for Palestine, due largely to the fact that Britain had already seized control of most of Eretz Yisrael by the end of the war. The territory of the Mandate of Palestine, as initially established and approved by the League of Nations, included all of the modern-day States of Israel and Jordan. Under the terms of the Mandate, which had the formal imprimatur of the League of Nations, the territory was further divided between Mandatory Palestine and the Emirate of Transjordan; the “Jewish home” provisions were suspensible in the latter, implicitly paving the way for contiguous Jewish and Arab states. The borders of the former coincided with the borders of Eretz Yisrael, and the borders of the latter corresponded with the borders of the modern Hashemite Kingdom of Jordan. The border between Mandatory Palestine and the Emirate of Transjordan was the Jordan River and a line extending south toward the Dead Sea, into which the Jordan River empties. It would not be inaccurate to refer to this as the European powers’ initial vision for a Jewish state and a contiguous Palestinian state.

The Mandate got its final approval two years after the San Remo Conference, in 1922, at which time Mandatory Palestine and the Emirate of Transjordan were formally severed, and the borders were implemented the following year. Britain, under the terms of the Mandate, was charged with reconstituting the Jews’ “‘national home” in Eretz Yisrael: “An appropriate Jewish agency shall be recogni[z]ed as a public body for the purpose of advising and co-operating with the Administration of Palestine in such economic, social and other matters as may affect the establishment of the Jewish national home and the interests of the Jewish population in Palestine, and, subject always to the control of the Administration to assist and take part in the development of the country.” Eventually, the Hashemite Kingdom of Transjordan declared independence in 1946, the year after Allied victory in World War II. The newly independent Kingdom assumed the same borders as the Emirate of Transjordan, in accordance with uti possidetis juris. This, despite the fact that no such state previously existed, and that it put a Palestinian-Arab majority under the rule of the Hashemite Bedouin clan.

Following Allied victory in World War II, Britain realized the impracticability of the Mandate and sought the help of the newly formed United Nations. The UN General Assembly appointed a Special Committee on Palestine, which, in November 1947, ultimately recommended a partition plan to the UN Security Council and Britain. The Security Council took no action on the plan, and Britain rejected it (as did the Arabs). The UN Partition Plan had no legal effect whatsoever—it was merely a non-binding UN General Assembly proposal. The British government planned to officially end the Mandate, irrespective of UN action, on Nov. 29, 1948, but left early on May 15, 1948—the day after Israel’s declaration of independence.

The principle of uti possidetis juris took effect at the very moment David Ben-Gurion declared the independence of a new Jewish state in Eretz Yisrael. Just as Transjordan, which declared independence two years earlier, assumed the preexisting borders of the Mandate’s Emirate of Transjordan, so too did the state of Israel assume the preexisting borders—“from the river to the sea,” to borrow from today’s SJP and JVP miscreants—of Mandatory Palestine. The combined effect of the entirely symbolic and non-binding UN General Assembly partition proposal and uti possidetis juris, as applied to Israeli independence, is remarkably straightforward: Israel, upon its independence on May 14, 1948, inherited all of Judea and Samaria (as well as the Gaza Strip).