How Joe Biden Can Save the U.S.-Turkey Relationship 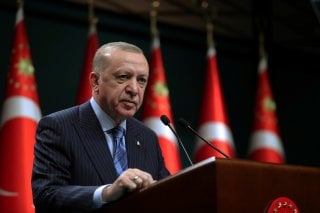 President Joe Biden will travel to Europe later this month for meetings with G7, North Atlantic Treaty Organization (NATO), and European Union (EU) leaders, as well as Russian president Vladimir Putin. While his first in-person engagements with European counterparts will likely occupy much of the media’s focus, a crucially-timed meeting with President Recep Tayyip Erdogan of Turkey might be his most consequential encounter of all.

American-Turkish relations have been sliding downward for more than a decade, in step with Erdogan’s Islamist-authoritarian approach to governance, which doesn’t sit well with Americans’ democratic impulses. No country, for example, imprisons more journalists than Turkey except China. Turkey also unjustly detained American pastor Andrew Brunson for nearly two years before releasing him in 2018, as payback for U.S. refusal to extradite an Islamic scholar living in Pennsylvania named Fetullah Gulen, whom Turkey accuses of masterminding the 2016 coup.

On the geopolitical front, Erdogan has been cozy with Hamas and the Muslim Brotherhood. Turkey also upset the Syrian applecart with its unilateral decision to invade Syria in October 2019. Its goal was to carve out a border-region buffer zone against heavily armed Kurdish forces fighting ISIS, whose ranks include fighters tied to the Kurdistan Workers’ Party (PKK)—a U.S.-designated terrorist organization that has killed thousands of Turks since the 1970s. You can’t fault Turkey for pursuing its top national security interest, but the move rattled nations invested in Syrian stability.

Most friction-inducing of all were American sanctions on NATO ally Turkey in 2020 for its acquisition of the S-400 surface to air missile defense system—a Russian-built piece of hardware that can’t integrate into NATO’s systems, and serves as a foothold for future Russian-Turkish defense partnerships. With the S-400 in hand, Turkey was also denied the chance to purchase American F-35 fighter planes.

In April, the Biden administration further infuriated Turkey when it decided to recognize as genocide the Ottoman Empire’s violence against ethnic Armenians during World War I. That announcement caused Erdogan to declare relations at a “new low,” but the timing was smart. It would be senseless to burn diplomatic capital on a mostly ceremonial declaration when the relationship was in a good place. Doing it at a nadir meant an unpleasant decision for Turkey came at a time when there was already little ground left to lose.

Now that there’s nowhere to go but up, a Biden-Erdogan meeting presents an opportunity for a reset. That’s no guarantee Turkey is looking for it, despite Erdogan’s recent remarks to U.S. executives that his meeting with Biden will be “the harbinger of a new era.” Erdogan is still smarting from the genocide declaration and may be considering retaliatory actions such as forbidding American use of the Incirlik air base near the Syrian border, or cutting a deal with the Bashar al-Assad regime to allow it access to Turkish-held areas in northern Syria. Assuming the Biden administration isn’t pursuing backchannel talks with the Assad regime, such access would be a setback for the West’s consensus goal of a Syria free of Assad—ordinarily a hated Turkish opponent.

The first thing President Biden can do to lower the temperature is publicly reject calls for Turkey’s ejection from NATO. Turkey has certainly been an irritant, but a total ostracism would dramatically weaken NATO’s southern flank and counterterrorism efforts and serve one of Vladimir Putin’s top strategic priorities of splintering the Alliance (nevermind that no procedural mechanism currently exists within NATO to force any ally out). A Turkey spurned by the United States and its NATO allies will only hedge more aggressively toward Russia and China.

Second, Biden should acknowledge Turkey’s constructive pursuits of strategic stability. Erdogan has a high appetite for risk and has proven he will act when his personal political interests and Turkey’s geopolitical interests intersect. Sometimes that ruffles feathers: See, for example, Turkey’s military intervention in the Libyan conflict, or its contentious energy exploration efforts in the eastern Mediterranean. But the country has also offered to host Afghanistan peace talks in Istanbul and has chaired the Organization for Security and Cooperation in Europe’s monitoring mission in war-torn Ukraine. Icy relationships with neighbors Egypt and Saudi Arabia are beginning to thaw. Turkey also has an interest in preventing Russian domination of the Black Sea. Affirming Turkish efforts to stabilize restive regions at the nexus of Europe and Asia can help restore trust, and hinder Russian and Chinese plays for Middle East influence.

But perhaps the most important determinant of the relationship’s future—Erdogan’s own political calculations—is beyond President Biden’s control. With the Turkish leader up for re-election in 2023 (if he doesn’t call a vote sooner), surely he is aware of how his unwealthy political base is enduring a debt crisis and double-digit inflation, problems that many economists attribute to Erdogan’s own economic illiteracy. Covid-19 has also done a number on Turkey’s economy by disrupting supply chains and crimping tourism revenues. As a result, Erdogan may forego revenge for the genocide declaration, and instead signal level-headedness to help arrest the country’s economic slide and attract foreign investment. Whatever the future holds for one of America’s most complicated bilateral relationships, better that Biden try and shape Erdogan’s foreign policy forays to America’s advantage, rather than refight old battles.

David Wilezol is a Senior Fellow for U.S. Foreign Policy at the American Foreign Policy Council and former Chief Speechwriter to the Secretary at the U.S. State Department.