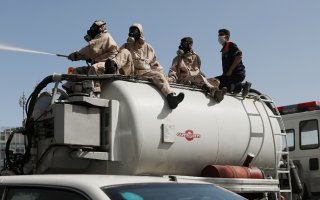 The novel coronavirus has spread through Iran amid an economic meltdown, leaving the poor and vulnerable segments of society more at risk. Reports have emerged of violence in prisons—particularly in ethnic minority regions—as well as coronavirus cases in migrant neighborhoods and social service centers. Meanwhile, the government has struggled to provide for the poorest segments of Iranian society.

“If you are a second-class citizen, your community is likely to be more impacted by this pandemic in Iran,” noted Behnam Ben Taleblu, a senior fellow at the Foundation for the Defense of Democracies. “We’re talking about fewer and fewer resources in an already-discriminatory system.”

The riots identified by Amnesty International took place at Sepidar and Sheiban prisons in Khuzestan, a restive Arab province often known as al-Ahwaz, on March 30 and 31. Prisoners had staged protests over their conditions, which they feared would spread the coronavirus.

Paramilitaries stormed the prisons and rained tear gas and live ammunition down on the prisoners, according to the human rights group.

Seventy prisoners had broken out of a prison in the Kurdish city of Seqqaz the Friday before.

Iran has furloughed a hundred thousand prisoners in response to the coronavirus pandemic, but authorities declared that “security prisoners” would be excluded.

Some of these political prisoners include American citizens. The U.S. State Department declined to comment on the number of Americans detained by Iran, citing “privacy and security considerations of ongoing cases,” but past State Department announcements have named Morad Tahbaz, Baquer Namazi, and Siamak Namazi.

Afghan immigrants, one of the poorest segments of Iranian society, have also been hit as the virus spreads through the southern suburbs of Tehran.

Mofateh Hospital in Varamin County, southeast of the capital, announced on Thursday that it would provide coronavirus care free of charge after an outbreak of the coronavirus. Hospital director Bahram Chuban said that 33 people had showed up at the emergency room and thirty were hospitalized, “most of them citizens of Afghanistan,” for the novel coronavirus.

Authorities began a screening program in Qarchak County, which borders Varamin, with a special emphasis on getting “citizens of Afghanistan living in the city” to participate. County executive Bahmani Khatibi claimed that 92% of the suburb’s population had been “screened” for symptoms through an online app, but it was not clear how many test kits were available.

One hundred and thirty clients at shelters for people with mental, intellectual and physical disabilities have also been infected with the novel coronavirus, according to Amin Shahrokhi, director-general for welfare in Tehran Province.

“One hundred and thirty individuals out of a population of 245,000 is a good number that we hope will improve soon,” Shahrokhi said. “Fortunately, sixty percent of patients have improved, and the rest are in good condition.”

The Iranian government has gone on a spending spree to alleviate the economic damage caused by the coronavirus, but citizens have seen meager amounts so far.

Cabinet officials announced payouts of 200,000 to 600,000 toman to 3 million people found to be living outside the social safety net, as well as interest-free loans of 1 million toman to all low-income families receiving government subsidies.

The government has resumed operations for “low-risk” businesses, despite warnings from the health ministry, in an attempt to stem the economic damage caused by the coronavirus pandemic.

But even these measures may just put low-income Iranians at a greater risk.

Kheyrollah Geravand, executive of Ilam County, warned that lines at bakeries could be a major vector for the spread of the coronavirus.

“Many citizens do not take the risk of coronavirus in the bakery line seriously, and this has caused them not to pay serious attention to social distancing,” he said. “Families need to be aware that coronavirus has not disappeared, and neglecting to follow health protocols will spread it.”

The current coronavirus death toll in Iran has breached 4,110, the health ministry announced on Thursday.