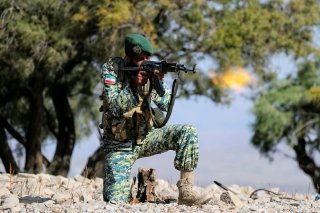 Iranian foreign minister Hossein Amirabdollahian, currently in Moscow for a round of discussions with Russian foreign minister Sergey Lavrov, insisted on Wednesday that the country would not accept “map change” in the Caucasus region, to its northwest.

While the comments were offered without reference to any nation, they were presumably directed at Azerbaijan, Iran’s northwestern neighbor, which has cooperated on defense issues with Israel, to Iran’s consternation. In a Moscow press conference, Amirabdollahian underscored that Tehran had “serious concerns about the presence of terrorists and Zionists in the region.”

Azerbaijan and Iran have long had a difficult relationship. In 1945, the Soviet Union sought to promote a secessionist uprising by ethnic Azeris in northwestern Iran, where they have long maintained a demographic majority. While the uprising was crushed the following year after Moscow withdrew its support, Iran has long feared Baku’s influence on Iranian Azeris, leading it to build closer relations with Armenia.

Iran maintained neutrality during the six-week war from September to November 2020 between Azerbaijan and Armenia. Both countries claim the Nagorno-Karabakh region, known in Armenia as “Artsakh,” which was part of Azerbaijan during the Soviet era but maintained a majority-Armenian population and sought to join Armenia following the Soviet collapse. While Armenia won the first war in 1994, Azerbaijan decisively won the 2020 rematch—largely owing to the influence of Israeli military technology, including drones. While Azerbaijan’s consequential victory led military planners to study its outcome for lessons, Iran quickly raised concerns about Baku’s use of Israeli weaponry.

Tensions have recently risen in other areas as well. After accusing Iranian truck drivers of driving through Azerbaijan’s territory to Armenia without paying road tolls, the Baku government imprisoned two Iranian truck drivers—leading Iran to stage a series of military exercises along the border.

Azerbaijan has denied that Israel has a presence in the country, and in response to Iran’s drills, it cooperated with Turkey, a long-time ally, in a series of its own exercises starting on Wednesday.

During his meeting with Lavrov, Amirabdollahian also added that he expected nuclear negotiations over a return to the stalled Joint Comprehensive Plan of Action (JCPOA) agreement to resume in Vienna soon. Under President Donald Trump, the United States withdrew from the agreement in 2018, leading Tehran to slowly abrogate many of its commitments to the remaining powers; President Joe Biden promised a return to the deal during his campaign, and Iranian president Ebrahim Raisi said in his August inaugural address that he would welcome further negotiations.