Is Iran Grooming Al Qaeda as its New Proxy in Afghanistan? 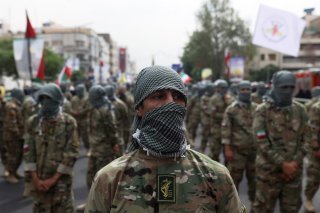 On August 1, 2022, an American drone strike in Kabul killed Ayman al Zawahiri, the head of Al Qaeda Central. News stories noted that Zawahiri went into hiding in the tribal areas between Afghanistan and Pakistan after Operation Enduring Freedom in 2002. This narrative omits the fact that Zawahiri spent a considerable time in Iran, where his heir apparent, Saif al Adel, still lives. Having harbored Zawahiri and Adel, the Islamist regime in Tehran stands to increase its influence among the broadly dispersed units of the terror group, which still subscribe to Osama bin Laden’s vision of waging war on the West.

Iran’s connection with Al Qaeda dates to bin Laden’s arrival in Sudan in 1991, where the Saudi terror entrepreneur set up camps to house and train Arab jihadists returning from the Soviet-Afghan war. Although bin Laden was a Sunni Salafist, Ahmed Vahidi, the then head of Quds Force (QF), the foreign operations division of the Islamic Revolutionary Guards Corps (IRGC), was keen to enlist him to fight against Saudi Arabia and the West. The IRGC-QF helped run training camps in Sudan, where Egyptian jihadists affiliated with Zawahiri’s Egyptian Islamic Jihad (EIJ) had a strong presence. Lebanese Hezbollah was also involved in training bin Laden’s group in a dedicated camp in the Beqaa Valley. Vahidi was rewarded when in 1993, Al Qaeda fighters participated in the battle of Mogadishu against the American-led peace force. After suffering casualties, the Clinton administration withdrew, ending active American involvement in Africa.

When, under American pressure, Al Qaeda was later expelled from Sudan, bin Laden and Zawahiri, serving as his second in command, established training facilities in Afghanistan. Protected by the ruling Taliban, Al Qaeda engineered several attacks on the American security infrastructure. For instance, in August 1998, Al Qaeda carried out truck bomb attacks on the U.S. embassies in Nairobi, Kenya, and Dar es Salaam, Tanzania, which killed 224 people, including twelve Americans, and wounded thousands more. In December 1999, Al Qaeda plotted to bomb hotels and other sites frequented by American tourists. During the same time, Al Qaeda attempted to smuggle explosives into the United States to attack Los Angeles International Airport. In October 2000, Al Qaeda in Yemen attacked the USS Cole destroyer, killing seventeen American sailors and almost sinking the vessel. Emboldened by the success, bin Laden and Zawahiri planned and successfully executed the 9/11 attacks.

In response, in October 2001, the United States launched Operation Enduring Freedom which devastated Al Qaeda’s “mini-state” in Afghanistan. Among those who fled, a sizable contingent of leaders and their families crossed into Iran at the invitation of Qasem Soleimani, the QF chief. The group included bin Laden’s son, Hamza, and his family, and Abu Muhammad al-Masri, Al Qaeda’s second in command, who was killed in August 2020 by Israeli special forces in Tehran. Saif al-Adel, an Egyptian jihadist who joined Zawahiri in Afghanistan, and his media operations head, Abd al-Rehman al-Maghribi, have also made their home in Iran. Nominally under house arrest, they were given the freedom to engage in new plots against the United States.

Iran also acted as a transit for Al Qaeda terrorists who strived to establish a new franchise. Abu Musab al Zarqawi, an “independent contractor” of bin Laden, moved to Iraq with the help of the IRGC-QF, where he established Al Qaeda in Iraq (AQI) in preparation for the American invasion. The Iranians supplied Zarqawi with automatic weapons, improvised explosive devices, ammunition, uniforms, and even real Iranian passports for his frequent recruitment trips. When Zarqawi moved to the Sunni Triangle, he mounted a vicious campaign against the Shiites. However, the IRGC-QF did not consider their support for Zarqawi a loss because of his brutal attacks against Americans.

Zawahiri, who succeeded bin Laden in 2011, alternated between stays in Iran, Pakistan, and Afghanistan, with the IRGC-QF furnishing him with travel documents, cell phones, and weapons.

Zawahiri’s death was met with a peculiar reaction. According to IRGC media, Zawahiri died on November 13, 2020, of liver cancer, and his death was reported by Tanẓim Ḥurras ad-Din, Al Qaeda’s Syrian affiliate. Tasnim News stated that advertising Zawahiri’s “fake killing” was part of America’s plan to return to Afghanistan after its humiliating withdrawal in 2021. Accusing the Taliban of violating the requirements of the Qatar Agreement by giving shelter to Zawahiri offered a good reason.

Regardless of the reasons given, Iran stands to profit from his death. Saif al-Adel is expected to take over Al Qaeda’s leadership—making Abd al-Rehman al-Maghribi second in command—at a critical moment for Iran. After a short honeymoon between Kabul and Tehran, relations with the Taliban deteriorated. On March 9, 2022, Taliban fighters killed four Iranian border guards in Nimruz Province over the dredging of the Sikhar canal. Although ostensibly a local issue, the tension has touched upon the larger struggle between Afghanistan and Iran over the shared waters of the Helmand River. During the rule of the American-supported government of Ashraf Ghani, the Iranians objected to the construction of the Poze Lich Hydropower plant in Ghor and the Bakhshabad and Salma dams in the neighboring province of Farah and Herat. On July 5, 2017, President Hassan Rouhani declared that Iran “cannot remain indifferent to the issue [water dams], which will damage our environment.” According to Rouhani, the “construction of several dams in Afghanistan would affect Khorasan and Sistan-Baluchistan provinces,” and Tehran “is not going to stand idly by.” Most recently, the Taliban government inaugurated the Qushtipa project, an ambitious irrigation scheme for tuning millions of hectares of arable land. Having used the Taliban to sabotage the Ghani government’s dam projects, the IRGC-QF would have few qualms about using Al Qaeda this time around.

In yet another ironic turn of events, Al Qaeda could replace the Taliban in the Guards’ profitable drug smuggling business. The IRGC’s Sarallah Corps in Kerman Province, known for its narcotic trade with the Taliban, can use Al Qaeda to smuggle heroin and opium into the west as part of its broader scheme to support terrorism.

If Iran can turn Al Qaeda Central into one of its proxies, efforts to destabilize Afghanistan would follow.