Iran Is Spoiling the Truce in Yemen 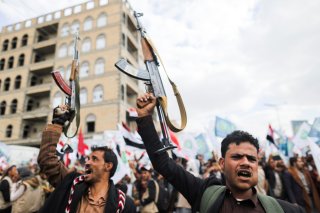 Yemen’s truce expired on October 2 after the Iran-backed Houthi rebels rejected proposals for its renewal. The ceasefire, which was extended twice, had significantly diminished regional hostilities and embedded confidence-building measures to help the parties negotiate. But none of the truce’s core objectives were met as the Houthis immediately started issuing threats upon its expiration. The Houthis’ military spokesperson warned Saudi and UAE oil installations workers to leave in anticipation of an attack. Locally, citizens heard violent clashes in the city of Taiz as the Houthis attempted to infiltrate Yemeni army barracks. The quick escalation is renewing fears that the Houthis are not concerned for the country’s stability.

Awareness of the Houthi’s inability to negotiate in good faith is sparking concern that the Yemen conflict will be prolonged. The Houthis’ demands were deemed maximalist by the European Union and the United Nations. And although the UN had secured a commitment from Yemen’s government and its Saudi backers for a ceasefire, with several measures that were a priority on the Houthis’ list, such as operating the airport in Sana’a and allowing expedited entry of fuel ships into their port on the Red Sea, it hasn’t been able to do the same with the Houthi militia. The Houthis ignored the government’s request to lift the siege on Taiz. They continued their escalation domestically, making it clear that they were unwilling to engage in a political process. This underscores the difficulty in getting to a quick resolution.

Yemenis have long been skeptical of the Houthis’ commitment to the peace process based on their track record of rejecting negotiations. However, the recent Houthi rejection of the truce seems to have caught Western policymakers off guard, leaving the UN for answers in all the wrong places. The UN Envoy, Hans Grundberg, reportedly reached out to Houthis’ Iranian backers to persuade the militia to abandon its maximalist positions. But it is more likely that Iran will push the Houthis to double down on their decision rather than cooperate. Iran’s entire relationship with its proxies is based on the premise that it could leverage this connection to achieve political goals that would serve the Islamic Republic and keep it in power. Given the current domestic unrest in Iran due to the death of the twenty-two-year-old Mahsa Amini and the accumulative deaths of protestors at the hands of the regime, there is no better time for Iran to lean on the Houthis than now.

Iran’s role in Yemen has never been in pursuit of the country’s stability. The Islamic Republic has maintained a singular focus on supporting the Houthi militia and empowering them militarily, strategically, and financially. This allowed Yemen’s conflict to be prolonged for as long as possible to keep attention on Saudi and Emirati behavior as it denied any involvement or maleficence in the country. In the past, Iran has hidden its support for the Houthis and vehemently denied backing the group. The policy community has gone along with this farce, ignoring Iran’s agenda in Yemen’s affairs, but accumulative evidence of its military and financial backing started to surface. From 2017 onwards, when the Houthis launched their first attack using ballistic missiles against Saudi Arabia, the Houthis’ military arsenal has grown thanks to Iranian supply and assistance.

Iran’s influence in the country is real. Its official media establishment has repeatedly given unequivocal backing to the Houthis, touting them as “resistance” forces and belittling Yemen’s government forces as “mercenaries.” Moreover, the Houthis received strategic combat training from the terrorist-designated Islamic Revolutionary Guard Corps, which has been working to improve the Houthis’ missile capabilities, by its own admission, as they have enabled Iran to turn North Yemen into a “testing ground for Hezbollah and Iranian missiles.

If Iran prevents the Houthis from engaging constructively in the truce, it will not be for the first time. On several occasions, Iran and Hezbollah have worked assiduously to upend negotiations between the Houthis and Yemen’s internationally-recognized government. During the 2016 talks with Yemen’s government in Kuwait, Houthi representatives frequently traveled to Lebanon, returning with new demands that ultimately stifled the discussions. According to a source in the United Nations who spoke on condition of anonymity, Mohamed Abdulsalam, the chief Houthi negotiator in Kuwait, had been mainly accepting and enthusiastic in considering an informal proposal for Saudis to end their role, only to report one day later that he did not obtain the greenlight to accept the agreement.

Iran has often put pressure on the Houthis in a way that undermined their movement’s credibility and forced them to act against their self-interest. For example, as tensions with the United States increased following U.S. sanctions on Iran, the Islamic Republic leveraged the Houthis to showcase its ability to destabilize the Gulf region and threaten global energy markets. As the United States dispatched an aircraft carrier group and imposed new sanctions at the beginning of May 2019, Iran retaliated around a week later, sabotaging four oil tankers off the Emirati port of Fujairah. It was not a coincidence that the very next day, the Houthis took responsibility for a drone attack on Saudi oil pumping stations that was later identified as having originated in Iraq. As the sanctions continued, the Houthis escalated their rhetoric without reason, pledging to launch 300 attacks against critical targets inside Saudi Arabia. Shortly thereafter, they conducted strikes at Abha and Jizan airports in the kingdom, a Najran arms depot, ships traveling in the Red Sea, and other targets.

Granted, Tehran may not be spending considerable resources on the Houthi militia. However, the Houthis are the most convenient proxy they can leverage due to their strategic location and ability to operate with impunity in the country. Other proxies like Hezbollah in Lebanon or the Hashd al-Shaabi (Popular Mobilization Forces) in Iraq may not be able to quickly retaliate on behalf of Tehran as there is a regulatory framework that governs these countries in a multi-party system. But the Houthis sit uniquely as the only power in Yemen occupying most of the northern areas, making them a reasonable and reliable force for Iran.

The Houthis’ hold over strategic cities in the northern parts of the country, including the capital, allows them to have deeper control over state institutions. Ministries, civil servants, the central bank, and Yemen’s major port are all resources they exploit to their liking. The Houthis never relinquished their military ideology and continued their expansion despite the different peace processes. Given the Houthis’ interest in increasing their footprint in Taiz and Marib, the ceasefire was never part of their long-term plans. They only agreed to it to allow them to reap the benefits of the truce while resting and replenishing their militia.

The way out of this political stalemate with the Houthis is not by offering more concessions that will end up enabling their behavior, but to confront the reality of the Houthis’ intransigence and reevaluate the entire truce with the understanding that Iran is a substantial spoiler of this process. Iran’s recent supply of Shahed suicide drones to Russia in its war on Ukraine should alert the international community that there are several dangers in leaving Tehran unchecked in Yemen. Policymakers should also refrain from pushing Yemen’s government to accept the Houthis’ maximalist demands to restore the truce and attempt to secure Yemen from future attacks. Such a decision would only help expand the Houthis’ power in exchange for saving an extremely limited process that is going nowhere.

Fatima Abo Alasrar is a Non-Resident Scholar at the Middle East Institute and a Senior Analyst with the Washington Center for Yemeni Studies.