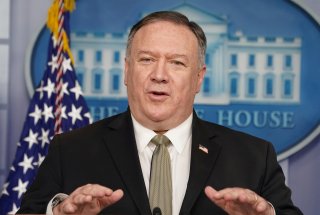 Iran’s health authorities have come under increasing pressure over their handling of the coronavirus pandemic, with a recent report by Iran’s independent parliamentary research service slamming the government’s response as unserious. The health ministry has gone on the offensive, blaming China and attacking the United States, to deflect domestic criticism.

A recent comment by Pompeo, itself aimed at domestic critics of U.S. foreign policy, gave Jahanpur the opportunity to take the offensive.

Pompeo told the Chris Salcedo Show on Tuesday that the rising number of deaths in Iran was “a direct result of the regime not having invested in their health care system, but rather having invested in Hezbollah and terror campaigns around the world.”

Jahanpur was asked about this comment in a Wednesday press briefing.

“The [U.S.] State Department will be held accountable through diplomatic channels. As for the field of health—in psychology we have defense mechanisms,” Jahanpur said. “Individuals project their problems onto others in order to prevent distress. The American secretary of state is no exception to this principle, and these psychological defense mechanisms are also active in him.”

He claimed that Iran was worried about the humanitarian situation caused by the “horrendous pressure on the American people” and the “dysfunctional healthcare system in the United States.”

Pompeo’s comments came as the Trump administration defends its self-described policy of “super maximum economic pressure” against criticism from Democratic members of Congress, many of whom see the economic sanctions campaign as an impediment to global cooperation against the novel coronavirus.

“We’ve offered humanitarian assistance from the very front end. We offered to provide food assistance, all the things that the Iranian people would need,” Pompeo added in his Tuesday interview. “This is not the time to throw a bunch of cash at the Iranian regime. It won’t work. That cash will go to be siphoned off for corruption. It’ll end up in the hands of arms merchants. It’ll end up in the hands of Shi’a [Muslim] militias and Hezbollah.”

Hezbollah is a Lebanese political party backed by Iran. The United States and several U.S. allies consider it a terrorist group. Iran has spent $12 billion on proxy forces and foreign wars over the past eight years, according to the State Department, about half of its coronavirus emergency budget.

Sen. Chris Murphy (D-Conn.) slammed U.S. economic sanctions on Iran and Venezuela at an event hosted by National Security Action on Tuesday, claiming that the pandemic will “result in the death of innocent people, partially as a result of U.S. policy that does not accrue to the national security benefit of our country.”

“Remember, if we don’t beat it there, we don’t beat it here. This virus doesn’t respect borders,” he added. “It’s just good public health policy to help even our adversaries beat back this scourge.”

The coronavirus has killed 4,777 people in Iran, according to official statistics, although a report by Iran’s independent parliamentary research service said that the real death toll is likely closer to 8,600.