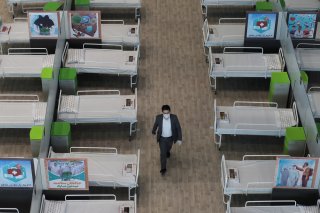 Iranian health ministry spokesman Kianush Jahanpur again called China’s official statistics on the coronavirus outbreak a “bitter prank” on Tuesday, after coming under fire for the same statement earlier in the month.

Iran’s political class has increasingly criticized the administration of President Hassan Rouhani for its handling of the novel coronavirus pandemic, which has killed at least 4,683 people in Iran as of Tuesday. A recent report to Iran’s parliament compared the country’s response unfavorably to the crackdown in China, where new deaths from the virus have stopped. But the Iranian health ministry said that the Chinese model is not applicable—because Beijing’s apparent success is allegedly a fraud.

“Many people in the entire world thought that this disease was like the flu and caused fewer deaths,” Jahanpur told reporters at a Tuesday press conference. “All of this was based on statistics from China, and it seems that China played a bitter prank on the entire world in this context.”

“If they say an epidemic was controlled in two months in China, we should think again,” he continued.

Jahanpur had previously made similar comments in April, sparking a reprimand from Amb. Chang Hua.

“There is a uniform trend in the coronavirus curve,” he added. “This shows that the disease has been managed in the country, but we have not yet reached the level of control, and the managed situation is also fragile.”

Deputy Health Minister Iraj Harirchi also claimed that the number of active coronavirus cases has decreased in all but six provinces, which he did not name.

The health ministry’s comments came as the Rouhani administration faced harsh internal criticism for its handling of the pandemic.

The Parliament Research Center, a body similar to the U.S. Congressional Research Service, issued a scathing report about Iran’s coronavirus response on Tuesday.

The report rated authorities’ response to the virus as “weak” in the beginning, and compared Iran’s current policies unfavorably to both the full lockdown in China and the extensive surveillance regime in South Korea.

“Neither of these two policies have been followed fully and correctly; not citywide quarantine (either in general or in centers of spread) in a serious way, not a policy of maximum testing and isolation,” the authors wrote.

Their report also warned that Iran needs to prepare for a second wave of the disease, expected to come when temperatures drop again.

Iran has adopted a policy of “smart distancing” to reopen the economy while ostensibly keeping the virus under control, despite warnings from the Iranian Medical Association.

But local authorities have complained of difficulties enforcing the type of social discipline necessary to keep the virus from spreading. Members of the Tehran municipal government have complained that the National Coronavirus Headquarters is blocking proposals to either shut down the capital’s subways or make protective masks mandatory for riders.

The comments could also portend a diplomatic opening between Iran and the United States, as constituencies in both countries call for better relations.

A growing number of Democratic politicians in the United States have called on the Trump administration to reverse its policy of maximum pressure against Iran in light of the pandemic.

“The Chinese ambassador’s arrogance about the coronavirus must be answered. The foreign ministry must summon the Chinese ambassador,” Iranian member of parliament Ali Motahari had written in an April 9 social media post. “Unfortunately, our economic reliance on China has also silenced us about the Chinese state’s great oppression of the Muslims of that country. Our struggle with America did not have to lead to dependence on China.”