Sen. Murphy: Trump’s Iran Policy Could Cause ‘the Death of Innocent People’ By Coronavirus 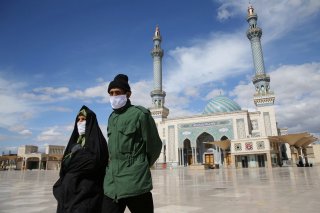 Sen. Chris Murphy (D-Conn.) warned on Monday that the Trump administration could be partially responsible for “the death of innocent people” if it continues its current policies towards Iran.

The novel coronavirus disease, also known as COVID-19, hit Iran at a time when U.S.-Iranian tensions were at an all-time high. The Trump administration initially relaxed its “super maximum economic pressure” campaign in order to allow for humanitarian trade but has refused to budge any further, claiming that the current exemptions are enough. Murphy disagreed.

He had penned a March 26 letter, signed by ten other Democratic senators, asking the Trump administration to ensure that Iran and Venezuela can import medical supplies and other humanitarian goods to deal with the coronavirus outbreak.

“Right now, our sanctions do not allow for that,” Murphy told reporters on the Monday conference call. “If this epidemic continues to grow and spread in Iran it will…result in the death of innocent people, partially as a result of U.S. policy that does not accrue to the national security benefit of our country.”

“Remember, if we don’t beat it there, we don’t beat it here. This virus doesn’t respect borders,” he added. “It’s just good public health policy to help even our adversaries beat back this scourge.”

He added that the pressure campaign “has thus far only resulted in Iran restarting their nuclear program, shooting at U.S. troops, and revving up their proxies in places like Iraq that put our soldiers in greater jeopardy than ever before.”

The Trump administration has repeatedly insisted that its sanctions campaign does not prevent Iran from buying humanitarian goods and that it is ready to donate aid directly if needed.

“The United States maintains broad authorizations that allow for the sale of food, agricultural commodities, medicine, and medical devices by U.S [sic] persons or from the United States to Iran,” the State Department wrote in an April 6 fact sheet. “Iran’s slick foreign influence campaign to obtain sanctions relief is not intended for the relief or health of the Iranian people but to raise funds for its terror operations.”

President Donald Trump told reporters on April 2 that “if [the Iranians] need help with respect to the virus, we have the greatest medical professionals in the world. We’d love to send them over.”

But the Murphy letter claimed that “medical suppliers and relief organizations simply steer clear of doing business in Iran and Venezuela in fear of accidentally getting caught in the web of U.S. sanctions.”

Venezuela has reported that 189 people have become infected with the coronavirus and nine people have died from the disease. Meanwhile, Iran has reported 74,877 cases and 4.683 deaths, but the true number of cases and deaths may be an order of magnitude higher.

Iranian authorities have also warned that a lack of revenue is preventing them from shutting down the country, leading the Rouhani administration to reopen the economy despite dire warnings from health professionals.

“We also recognize in that letter than it’s not just about medical equipment,” Murphy said. “I am certainly open to broader measures that would put Iran in a position to be able to turn a corner on this virus.”

Iran has asked the International Monetary Fund (IMF) for a $5 billion emergency loan to deal with the pandemic. The U.S. government has the largest number of votes on the global lender’s executive board, giving it the power to veto Iran’s request.

Rep. Ilhan Omar (D-Minn.) and Sen. Dianne Feinstein (D–Calif.) have called on the Trump administration to allow the loan to move forward, but the State Department has promised to oppose it.

“I have not done a detailed review of the IMF proposal, but I am attempting to lead the charge in opening up new pathways of support for Iran’s effort to beat the virus,” Murphy said. “Remember, if we don’t beat it there, we don’t beat it here.”