The Iranian People Are Ready to Seize Democracy 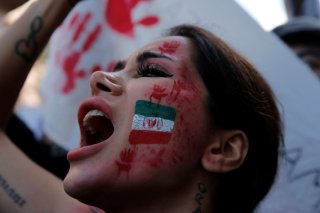 The recent riots in Iran over the death of Mahsa Amini, the twenty-two-year-old Kurdish woman murdered by the Islamic Republic’s chastity police, have unleashed a torrent of speculations about the regime’s future.

Some observers have expressed hope that the widespread protests could result in a regime change. Others, pointing out the brutality of the theocracy and its successful history of suppressing previous unrest, are pessimistic. Some have claimed that even if the regime is repudiated, the future will not look any better because the Iranian people cannot sustain a democracy. The article “Iran’s Empty Uprising,” penned by Sohrab Ahmari, stands out in this context.

According to Ahmari, Iranians have a long history of unsuccessful attempts to implement democracy. He implies that much of this failure stems from a political culture where people need someone in authority to tell them what to do. As he put it, “I fear what it might portend should it succeed” because the Iranian society and “political culture demands a living source of authority,” making democracy unviable. Furthermore, Ahmari contends that Iran is a multi-ethnic and multi-religious society where reaching a democratic consensus is impossible.

Ahmari’s article is troublesome on different levels. First, it echoes Edward Said’s claim that Western historians applied a Eurocentric perspective to the Middle East. This so-called Orientalist prism led them to believe that the region was too backward to nurture civilized values, including democracy. This view is doubly ironic because the author himself is from Iran.

Second, Ahmari seems to forget that the 1979 Islamic revolution was broad-based and produced a reasonably representative government under Mahdi Bazargan and then Abolhassan Banisadr. Sadly, the democratic impulse was snuffed by the Islamists who appropriated the revolution and brutally eliminated those who disagreed with them. As is well known, President Ebrahim Raisi was implicated in the murder of thousands of political prisoners in 1988. The highly respected international lawyer Geoffrey Robertson, who investigated the massacre, found it to be the second-worst violation of prisoners’ rights since the end of World War II, superseded only by the mass killing in Srebrenica, Bosnia, and Herzegovina.

Despite the personal dangers, there was a pushback from ordinary people who rebelled against their authoritarian religious rulers. Today, Iran has seen flourishing civic groups, something that was manifested in significant protest movements like the Green Movement in 2009, the environmentalist movement, and the human rights and women’s rights movements. Public and intellectual discourse on social and political issues, such as the relationship between religion and state, state and civil society, and Iran’s future ideological orientation and identity, have also proliferated.

Third, Ahmari seems to believe that Iran’s multiethnicity dooms the country to disintegration. Essentially, this echoes the argument of the government, which invariably portrayed ethnic minorities (Kurds, Arabs, Baluchis, Azeris) as separatists who threatened the integrity of the state. The reality has been very different. During the past four decades, not only have ethnic minorities been widely and grossly neglected, but they have suffered the brunt of the regime’s repression. The government’s discrimination in allocating public resources hit ethnic minorities particularly hard. It has massively diverted state resources away from Kurds, Arabs, Baluchis, and Azeris to the Persian Shiite population. The unequal distribution of resources resulted in deep poverty in provinces home to ethnic minorities, far more profound than the level of poverty among other Iranians.

Ethnic minorities are not allowed to operate schools in their native language. Instead, they are forced to use Persian in all formal settings. Ethnic minorities have regularly been subject to ridicule in the official media, state-sponsored programs, and school textbooks.

The minorities have struggled to persuade the rulers in Tehran to treat them equally and end state oppression. Unlike many other minorities around the world, they have never adopted secessionism. What is more, the current round of upheaval has brought different ethnic and religious groups closer together.

Given the civic maturation of the society and the non-secessionist sentiments among the non-Farsi populations, it can be expected that Iran will adopt a secular nationalist identity as the principle of unity. This Iran-centric vision is the most vital source of orientation that can tie Iran’s multi-ethnic, multi-religious society together to live in harmony. It is characterized by a belief in popular sovereignty, democracy, the rule of law, and prioritizing national interest rather than pan-Islamic aspirations. This assumption is based on an April 2022 survey of Iranians by GAMANN, a reputable research foundation. The poll indicates a preference for a modified British-style constitutional democracy under Prince Reza Pahlavi, the son of the late Shah, with 39 percent of the respondents expressing positive views about him. The survey also shows strong support for a democratically elected assembly, the parliament. The GAMANN opinion poll goes a long way toward answering Amari’s question to the liberal opposition “who would [you] have rule us.” Ahmari knows that the prince is very popular but chooses to describe him as “indolent” and “out of touch,” apparently to press his theory that the “uprising is empty.”

The Iranian people desperately need the help of the international community, especially the United States, to continue their courageous fight. Expressing confidence in their ability to create a democracy would be the right step in this direction.

Moreover, Washington should have every incentive to support the Iranian people. For over four decades, the United States has been waiting for a moment when the population would cease to believe that America, “the Great Satan,” is their enemy. That moment is now; Iranian protesters are shouting, “they are lying that our enemy is America; our enemy is right here.” The Biden administration should seize the moment.

Farhad Rezaei is a Senior Fellow at Philos Project.

Editor’s note: The original version of this piece incorrectly stated that 64 percent of respondents expressed positive views of the Prince Reza Pahlavi. The correct figure is 39 percent. We regret the error.