Israel Is at the Forefront of Cutting-Edge Warfare 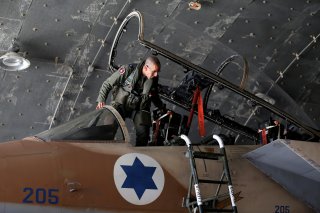 Israel hosted air forces from seven countries in a biennial exercise called Blue Flag. The last time the exercise took place was in 2019. That year, it included 725 personnel from Israel, the United States, Greece, Germany and Italy. This year, the United States, Germany, France, Italy, India, the UK and Greece took part in the exercise alongside Israeli pilots and advanced fifth-generation F-35 fighter jets.

This is important because it brings together key Israeli partners and allies. Israel has become much closer to Greece in recent years. This is due to shared interests in the Eastern Mediterranean, including a planned pipeline. Israel also hosts the Noble Dina naval exercise which has included Greece, France and Cyprus. Israel has conducted joint F-35 fighter jet drills, called Enduring Lightning, with the United States in 2020. This is part of a wider process that shows Israel integrating into Central Command and Israel normalizing relations with the UAE and Bahrain, two countries that also host U.S. military bases. In July, Israel brought together drone operators from the United States, France, Italy, Germany, and the United Kingdom for the Blue Guardian drone drill.

Blue Flag is yet another capstone on top of these growing relationships between Israel and its allies. Israeli F-35 fighter jets participated alongside the warplanes of other countries.

Blue Flag is a biennial exercise that takes place at Ovda Air Base in southern Israel. As part of this year’s events, the commander of the German Air Force performed a flyover of Jerusalem and conducted a visit to the Yad Vashem Holocaust memorial. The honorary flyover included a joint formation led by Israeli Air Force Commander Maj. Gen. Amikam Norkin and German Air Force Commander Lt. Gen. Ingo Gerhartz, according to the Israeli Defense Forces. “The flyover passed over the Israeli Knesset building, and ended over Malcha,” according to the Jewish News Syndicate.

“The Israeli and German Air Force commanders also visited the Yad Vashem Holocaust Memorial Center, where they toured the ‘Flashes of Memory’ photography exhibition, and participated in a memorial ceremony at the Hall of Remembrance,” according to the Jewish News Syndicate. “During the ceremony, the commanders lit the eternal flame and laid a memorial wreath in honor of the victims of the Holocaust.”

“[A]round this virtual table—there is a unique set of capabilities, knowledge, and experience that can be used to create the network that we all want to see created. . . I think the word we’re looking for here is ‘synergy’ because this is what we’re going to try and create starting with this meeting—synergy that will help us work together on infrastructure, digital infrastructure, transport, maritime security and other things that preoccupy us all,” Israeli foreign minister Yair Lapid said.

On the defense front, Israeli defense companies are continuing to show off cutting-edge technology. At the Milipol expo in Paris, Israel’s Rafael Advanced Defense Systems is unveiling two new cyber solutions. One solution is called Cyber Situation Awareness, which the company says “collects and aggregates information from across different infrastructure networks such as airports, railways, or seaports, and IT and OT operations networks to create a comprehensive image of current cyber threats.” A second system called Cyber Management System is a “unique, holistic solution providing automated reactive and proactive information gathering and incident response processes. It enables analysis to identify threats and vulnerabilities in advance of impact while simultaneously tracking incident response metrics,” according to a Rafael Advanced Defense Systems fact sheet.

Israel and its defense innovators have long realized that cyber and artificial intelligence are part of what will define war in the future. That is why Israel is also trying to put the latest technology into new programs like the Carmel program for fighting vehicles. In the United States, a number of Israeli defense companies took part in the Association of the United States Army Annual Meeting. UBlue Flag is yet another capstone on top of these growing relationships between Israel and its allied military forces.ision, which makes loitering munitions, signed a deal with MAG Aerospace which will offer operational and training solutions for the Hero family of loitering munitions.

Israel Aerospace Industries was also at AUSA and showed off its new Rex MK II autonomous vehicle, along with a number of drones and loitering munitions. These include the Rotem, Harop and Green Dragon, and other munitions. Boaz Levy, IAI’s President and CEO, said that “IAI is pleased to participate in AUSA 2021. We have a long history of supporting US defense initiatives and working side-by-side with the US defense industry to develop and provide ground-breaking technological innovations. Just this past year, IAI supplied 400 Wind Guard Radar systems for the U.S. Army’s Abrams tanks.”

“Our shared values of innovation, defense and economic development are the basis of our fruitful collaboration, and IAI is excited for the opportunity to create new partnerships and collaborations with local defense companies during AUSA.” Levy said. “Rafael also showed off its Samson 30-millimeter Integrated Remote Weapons Station for light vehicles. The company said it was “equipped with hostile fire detection capabilities and the ability to rapidly and effectively return fire via a fast, accurate slew-to-cue mechanism. It also includes a unified user interface for all subsystems, an inherent hatch for close situational awareness, and under-armor ammunition loading that increases lethality. These capabilities enable the Samson to turn a light vehicle into a lethal powerhouse on par with a main battle tank.”

Meanwhile, Israel’s Smart Shooter, which makes a fire control system for rifles, announced a new deal with the U.S. Marine Corps. The systems will be delivered by the Israeli company later this fall.

Overall, the story of Israel hosting the Blue Flag drill and its participation at events such as Milipol and AUSA are part of the widening arc of Israeli relationships and also the way its defense innovations continue to play a key role in the United States, Europe and elsewhere. While Israel doesn’t make large platforms like the F-35 fighter jet, it continues to make key elements for next-generation aircraft, missiles and vehicles. For instance, Elbit Systems plays a role in the helmets for F-35 fighter jets and had delivered, alongside Collins Aerospace, one thousand of the helmets by 2019. IAI makes wing skins for the F-35 fighter jets. Rafael has partnered with Raytheon on the Iron Dome system, of which two batteries have been delivered to the United States. This means that increasingly when pilots arrive in Israel for drills like Blue Flag they are familiar with Israel’s technology and its place on the future battlefield.

Seth J. Frantzman is a Jerusalem-based journalist who holds a Ph.D. from the Hebrew University of Jerusalem. He is the executive director of the Middle East Center for Reporting and Analysis and a writing fellow at the Middle East Forum. He is the author of After ISIS: America, Iran and the Struggle for the Middle East (Gefen Publishing) and Drone Wars: Pioneers, Killing Machines, Artificial Intelligence and the Battle for the Future (Forthcoming Bombardier Books). Follow him on Twitter at @sfrantzman. This article is being republished due to reader interest.