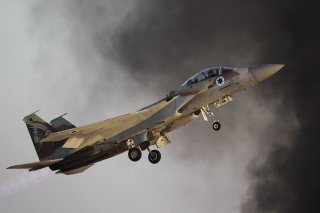 An Israeli airstrike damaged a container terminal and started a fire at Syria’s key port of Latakia on Tuesday, according to local reports.

The Syrian state-run SANA news agency cited a military official who claimed that missiles had hit the port’s container terminal. The missile strike had led to a fire, which took firefighters more than an hour to put out, the official said.

A separate newscast by the Syrian state-run Al-Ikhbariyah television station showed damage to the terminal, displaying firefighters’ attempts to control the blaze. It also claimed that other buildings in the vicinity of the terminal, including a hospital and several residential buildings, had been damaged in the strike.

The attack on the port is the second within a month. Israeli planes bombed the same terminal on December 7, causing another fire.

However, the Al-Ikhbariyah report noted that the attack on Tuesday appeared to have been larger than the initial strike, and observed that separate explosions could be heard in Tartus, a coastal city roughly fifty miles from Latakia. It remains unclear if there were any casualties from the attack.

The Syrian Observatory for Human Rights, a Britain-based NGO that monitors the war and is associated with the Syrian opposition, claimed the attack on December 7 was aimed at arms shipments from Iran. It is unknown if the Tuesday airstrike was intended for a similar target. The Israel Defense Forces (IDF) did not comment on the attack, in accordance with its longstanding policy of refusing to discuss its operations in other countries.

The alliance between Assad and the Iranian government, whose Quds Force helped to support Assad during the peak of the conflict during 2014–2015, has given Iranian militants a free hand to operate in Syria. Israel regards Iran’s presence in Syria as a major threat to its security, and its military has conducted hundreds of airstrikes during the country’s civil war, largely targeting Iran-associated forces such as Hezbollah.

The port at Latakia, the seat of a namesake province, has been a critical inlet of supplies to the government of Bashar al-Assad, which maintained effective control over the province throughout the country’s decade-long civil war due to its high concentration of Shi’a Alawites. Assad is an Alawite, and his family historically hails from Latakia; Assad’s father, former dictator Hafez al-Assad, was born near the city.