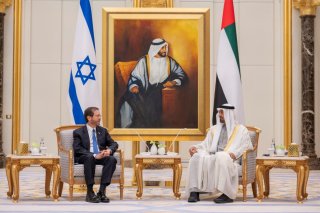 The three leaders discussed the ongoing Russian invasion of Ukraine and the “P5+1” negotiations with Iran over its nuclear program, in addition to energy policy, food security, and other regional issues, according to press statements.

“The leaders discussed the ties between the three countries in the context of recent developments in the world and the region, and the ways to strengthen them on all levels,” a statement on the meeting issued by Bennett’s office read.

The discussions on the Iranian nuclear deal, which is close to completion after the United States and Russia appeared to resolve an ongoing issue regarding sanctioned Russian commerce with Iran, were given particular importance in the statement. Israel has long opposed nuclear negotiations with Iran, and Israeli lobbying in Washington was instrumental in President Donald Trump’s decision to abandon the original Joint Comprehensive Plan of Action nuclear agreement in 2018. Although then-Israeli leader Benjamin Netanyahu was voted out of office in mid-2021, Bennett, who was formerly a Netanyahu ally and who shares many of his foreign policy goals, has continued to oppose negotiations.

The ongoing crisis in Ukraine has led to economic turmoil in Egypt, which is heavily dependent on Russian wheat imports. Instability in global grain markets led some Western investors to withdraw from the country, causing the Egyptian pound to lose roughly 14 percent of its value.

The relationship between Israel, the UAE, and Egypt has grown stronger in the aftermath of the Abraham Accords. Bennett and Israeli president Isaac Herzog have each visited the UAE in pursuit of closer bilateral ties, and Mohammed bin Zayed agreed in December 2021 to make a reciprocal visit to Israel in the future.

Israel and Egypt have had diplomatic relations since 1979, when Israeli prime minister Menachem Begin and Egyptian president Anwar Sadat signed a peace treaty ending the thirty-year conflict between the two countries. The agreement was reviled throughout the broader Arab world and led directly to Sadat’s assassination in 1981, although his successor, longtime Egyptian leader Hosni Mubarak, kept it in place.

The UAE was the third country in the region to open relations with Israel, after Egypt in 1979 and Jordan in 1994. Bahrain, Sudan, and Morocco also opened relations with Tel Aviv shortly after the Abraham Accords were finalized.