Israeli President to Make Historic Trip to the UAE 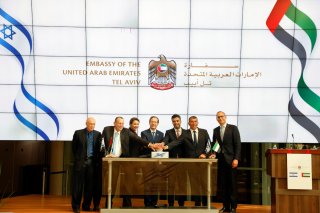 Isaac Herzog, Israel’s president, will visit the United Arab Emirates at the end of January, marking the first visit to the country by an Israeli head of state.

The president and his wife will embark on a two-day visit on January 30, according to Herzog’s official website. While there, they will meet Crown Prince Mohammed bin Zayed, the de facto ruler of the UAE, as well as the ruler of Dubai and other high-ranking officials. The two leaders will also visit Expo 2020, the ongoing world fair in Dubai.

“We have the privilege of making history by making the first visit of an Israeli president to the United Arab Emirates,” a statement issued by Herzog’s office read. The statement argued that the growing ties between Israel and the UAE marked the beginning of a “bold new partnership” that would “transform the Middle East.”

Herzog’s visit comes sixteen months after the announcement of the Abraham Accords, the peace agreement that led to mutual recognition between Israel and the United Arab Emirates. Bahrain and Morocco later joined the Abraham Accords and recognized Israel for the first time. While the civilian government of Sudan also agreed to recognize Israel, it has not yet done so due to instability following an October 2021 military coup.

The Abraham Accords signified the official emergence of the Israel-UAE partnership, although both nations had enjoyed growing political and security ties in the decade prior. The two share a number of overlapping interests, including their mutual opposition to Iran. Bennett’s visit to the UAE largely focused on the ongoing nuclear negotiations between Iran and the “P5+1” nations in Vienna, Austria. Although Tel Aviv and Abu Dhabi are not formally involved in the negotiations, they both have a key stake in any potential agreement.

Prior to his election as president, Herzog led Israel’s Labor Party and served as the Leader of the opposition from 2013 to 2018 under the government of Benjamin Netanyahu. Netanyahu has held that role himself since Bennett successfully created a governing coalition in June 2021.

The Israeli president’s position is largely ceremonial, with executive functions mostly carried out by the prime minister and his or her cabinet.