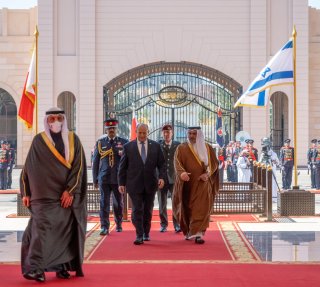 Bennett was welcomed by the crown prince and a military color guard at the Gudaibiya Palace in Manama, Bahrain’s capital. During the visit, Bennett indicated that he and other Israeli officials came “with a spirit of goodwill, of cooperation, of standing together against mutual challenges.”

In his remarks, Bennett praised ongoing cooperation between Israel and Bahrain and indicated that he favored increased economic integration between the two countries.

“We want to fill this relationship with substance in energy, in drive, in economy, in tourism, and in the regional architecture,” the Israeli leader said.

During his meeting with the king, Bennett also discussed regional security, an important issue for Bahrain, which has historically been dominated by neighboring Iran. The majority of Bahrainis are Shia Muslims, while the royal family and much of the elite class are Sunni. This dynamic has been a lingering point of tensions in the country, which came close to open revolt in 2011 before a military intervention from neighboring Saudi Arabia restored the government’s control. At the time, Bahraini leaders alleged that the instability was instigated by Iran, although human rights groups contest this.

Bahrain, along with the United Arab Emirates, was one of two nations to make peace with Israel in the U.S.-mediated “Abraham Accords” in September 2020. Israel, the UAE, and Bahrain have pursued close security ties in the wake of the peace agreement, with the three nations cooperating in U.S.-led naval exercises in the Red Sea in late 2021. Manama also signed a defense cooperation agreement with Tel Aviv in early February, formalizing the two nations’ military partnership.

Before his return to Israel, Bennett also met with Vice Admiral Brad Cooper, the commander of the U.S. Navy’s Fifth Fleet, which is based in Bahrain. The prime minister’s office praised the fleet’s presence, arguing that it was a “significant element in maintaining regional stability” in the Persian Gulf.

Finally, Bennett met with Bahrain’s small Jewish community, which numbers only a few dozen individuals but has a recorded presence dating back to the Middle Ages.