Jamal Khashoggi's Murder is Playing Out as Expected 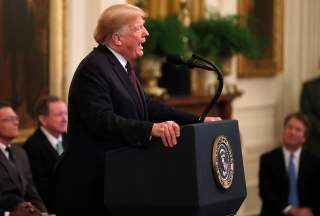 Yesterday, Treasury Secretary Steve Mnuchin announced the leveling of Global Magnitsky Human Rights Accountability Act sanctions on seventeen Saudi nationals allegedly involved in the death of journalist Jamal Khashoggi in Istanbul last month. Mnuchin said the right things about “justice” and “accountability,” but all indications are that the Trump administration wants to put this matter to rest as quickly as possible, with the barest of consequences for a gruesome crime that shocked Washington and the world.

Saudi foreign minister Adel Al-Jubeir reiterated on Thursday that Crown Prince Muhammad bin Salman (MBS) had “absolutely” nothing to do with the killing. Jubeir’s words came shortly after the Saudi public prosecutor announced that he was seeking the death penalty for five men involved in the case. The whereabouts, and condition, of Khashoggi’s body remain unknown.

The Saudi official story has evolved yet again, from “no idea” to “rogue operation” to “fist fight gone wrong” to “premeditated murder” to the latest, most brazen incarnation: killed after a struggle with a “negotiating team.” None of these tales are tenable. Barbara Bodine, former U.S. ambassador to Yemen, put it well: “If this is a rogue operation, the rogue is MBS.” The Brookings Institution’s Bruce Riedel, a former CIA official and expert on Saudi Arabia, concurred: “Saudi Arabia doesn’t work that way. They don’t freelance operations.” The CIA has apparently concluded as much.

Interestingly, Major General Ahmed al-Asiri, the former deputy head of Saudi General Intelligence, was not among those sanctioned on Thursday. Al-Asiri, a commoner from a remote region with a background in the kingdom’s air defense forces, is reputed to be a close confidant of MBS. Al-Asiri was fired nearly a month ago in the wake of the Khashoggi killing, with the Daily Beast reporting that plans were afoot to pin the murder on him as a supposedly overzealous subordinate. It now appears that even this moderate sacrifice will not be required of the crown prince.

There is no evidence yet that the Khashoggi killing has been leveraged by the United States to other ends. The United States announced last week that it will no longer refuel Saudi coalition warplanes bombing Yemen, but this is not a crippling imposition. America still provides intelligence assistance and weapons to coalition members. The offensive against Hodeidah has been put on hold, but the end of the Saudi portion of the war in Yemen does not appear imminent.

Perhaps the Saudis will be key to President Donald Trump’s purported Israeli-Palestinian “deal of the century.” However, in a rare strong statement in July, the frail Saudi king Salman reaffirmed the Palestinian right of return and the necessity of a Palestinian capital in Jerusalem.

On Tuesday the Trump administration announced the nomination of retired General John Abizaid as the next ambassador to Saudi Arabia. Of Lebanese Christian descent and a fluent Arabic speaker, Abizaid wrote his master’s thesis at Harvard on Saudi Arabia’s weapons procurement policy. More importantly, he shouldered responsibility for the entire U.S. military effort in the greater Middle East from 2003 to 2007 as commander of U.S. Central Command. Unlike many of his potential new colleagues in the Trump administration, Abizaid has stated publicly that the United States can live with a nuclear Iran.

One hopes that General Abizaid extracted a guarantee that Jared Kushner would excuse himself from being de facto ambassador to the kingdom, late night WhatsApps and all. Our princeling-to-princeling diplomacy has been an abject disaster since it began last year. Perhaps, for a change, we will have an adult in charge.

But as I and plenty of others predicted, this was always the way the aftermath of the Khashoggi killing was going to play out. The assassins themselves will be punished, a semi-important scapegoat or two will be found, and life will go on, with no more than a slap on the wrist to our increasingly reckless Arabian client and the actual architect of the murder. Absent a rare assertion of Congressional will and authority, or a true smoking gun in the case, we will return to business as usual with Saudi Arabia relatively quickly. Even the tech bros will be back in Riyadh before long.