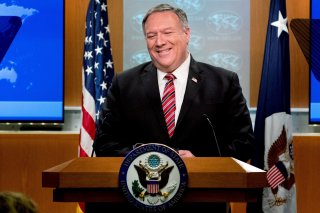 The United Nations arms embargo on Iran is set to expire this October as part of a 2015 deal regulating the Iranian nuclear program. All five permanent members of the Security Council, including the United States, signed onto the deal, but the Trump administration now argues that lifting the arms embargo would be a mistake.

The State Department claims it can use a controversial legal mechanism to snap back the arms embargo without other Security Council members’ consent. European diplomats have thrown cold water on the plan, while Russia has called it “ludicrous,” raising the possibility of a bitter showdown over the United Nations’ authority.

Three hundred and seventy eight members of Congress seemed to endorse the Trump administration’s position in a Monday letter calling for “increased diplomatic action by the United States to renew the expiring United Nations arms embargo against Iran.”

But a few signatories made it clear that they did not support the UN showdown—even as the timing of their letter appeared to be a shining endorsement of the Trump administration’s goals.

House Foreign Affairs Committee chair Eliott Engel (D–N.Y.) said in a separate statement on Monday that the embargo should be restored “not through snapback or going it alone, but through a careful diplomatic campaign.”

Iran has also claimed that extending the UN arms embargo will cause the 2015 deal to “die forever,” potentially removing all remaining restrictions on the Iranian nuclear research program.

Secretary of State Mike Pompeo has repeatedly said that he considers the 2015 deal a “disaster,” a position that puts him at odds with many of the signatories.

Rep. Ilhan Omar (D–Minn.) said signing the letter “is not to say that she supports Pompeo’s tactics or that her position on sanctions has changed, or that she is not in support of the [2015 deal]. It was just a narrow ask that we couldn’t find anything wrong with,” her office told Al Monitor.

Omar had helped lead a push to tone down the Trump administration’s campaign of economic pressure against Iran in light of the coronavirus pandemic, signing a letter in April alongside several Democrats.

Engel himself initially opposed the 2015 deal, but he also opposed the Trump administration’s decision to leave it in 2018. So did Mac Thornberry (R–Texas), Lois Frankel (D–Fl.) and Mike Turner (R–Ohio), who all signed Monday’s letter.

The language of the Monday letter itself makes no mention of the 2015 deal or the Trump administration’s current threat to snap back the embargo.

“Iran’s illicit transfers of weapons directly contribute to some of the most destabilizing threats to the United States and our partners in the Middle East such as Israel and the Gulf States,” the letter reads. “Even so, the [arms embargo] serves as an important means to restrain the sale of weapons to Iran and makes clear continued international resolve to stop Iran’s illicit weapons transfers.”

“America must continue its longstanding, bipartisan leadership in order to limit Iran’s destabilizing activities throughout the world. We look forward to working with you to re-authorize these expiring U.N. restrictions, which are essential to protecting our national security and the American people,” it concludes.