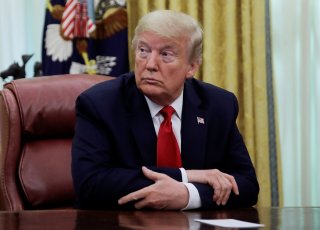 Special Representative Brian Hook told reporters on Thursday that he is “not going to answer” how the United States would respond if Russia and China began selling weapons to Iran against U.S. wishes.

But the Trump administration does not have a clearly-articulated plan for what to do next. Hook, who oversees Iranian affairs at the State Department, rejected the question as a “hypothetical” when asked what to do if Russia and China simply ignores U.S. declarations.

The Security Council passed Resolution 2231, which lifts the arms embargo on Iran in October 2020 unless a “participating member” objects, as part of a 2015 deal to regulate the Iranian nuclear program. The Trump administration left the deal in 2018, but claims that it still has the legal right to snap back the embargo under Resolution 2231.

“It’s very clear the United States is named as a [2015 deal] participant in paragraph 10 that defines the term ‘participant’ for 2231,” Hook said. “So our right as a participant is something which exists independently of the [2015 deal].”

“There is no qualification in 2231 where ‘participant’ is defined in a way to require participation,” he added.

Russia and the European Union have both rejected Hook’s line of reasoning.

E.U. chief diplomat Josep Borrell added in a Thursday interview with Radio Farda, a U.S.-backed Persian-language news station, that it is “quite clear for us that the U.S. are no longer a participating member in this agreement.”

“In terms of China and Russia’s role in the Council, if you’re a member of the Council, you have an obligation to follow what the Security Council decides,” he said, adding that “we have had good experience working with the Chinese and the Russians, as I did during the Bush administration, on putting in place a multilateral sanctions architecture.”

Hook claimed that he hasn’t “seen any Europeans publicly say that they would like to see the arms embargo expire” in response to a separate question.

The Trump administration is “hopeful” that it can pass a unanimous Security Council resolution to extend the arms embargo before triggering Resolution 2231, he confirmed.

The State Department has been signalling for some time that it wants to snap back the UN arms embargo for some time. Hook had previewed this legal argument at a February event, but the final straw seems to have been an Iranian spy satellite launch in April.

Snapping back the arms embargo would also make it harder for the next administration to return to the 2015 deal, which prominent Democrats are calling for.

Radm. Ali Shamkhani, head of Iran’s National Security Council, warned on Sunday that the 2015 deal “will die forever” if the arms embargo is restored.

“Unfortunately, the previous administration, Secretary [of State John] Kerry and President Obama, thought that October of…2020, this year, a few months from now, was a perfectly good date on which the Iranian government should be able to purchase conventional weapons systems from around the world,” Secretary of State Mike Pompeo told the Lars Larson Show on Thursday.

“The good news is the UN Security Council resolution gives us the ability to make sure that that doesn’t happen,” he said. “We are working with our Chinese, our Russian, our British, our French, our partners on the Security Council.”