Iran’s New Satellite: a ‘Threat to Civilized Nations’ or a ‘Tumbling Webcam’? 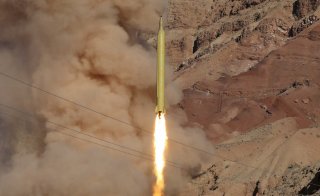 The Trump administration and its allies have portrayed Iran’s first successful military space launch last week as a major threat to international security. Secretary of State Mike Pompeo is using it to justify several policy goals, from continuing the economic sanctions campaign against Iran to pushing the United Nations to extend an arms embargo on the Islamic Republic.

But the U.S. military has downplayed the Iranian satellite, arguing that it is not even useful as an intelligence platform.

The Islamic Revolutionary Guard Corps (IRGC) claimed that it had put a satellite into orbit in a surprise announcement last week, bragging that it could “visualize the world from space” in order to expand its “strategic intelligence” capabilities.

Risch stated that the Iranian satellite launch “showcases a potential path to an intercontinental ballistic missile and highlights the weaknesses of the Joint Comprehensive Plan of Action” or JCPOA, a 2015 agreement signed between Iran and six world powers.

Pompeo used the space launch to push for restoring the United Nations arms embargo on Iran, which is set to expire in October 2020. The Trump administration has increasingly hinted that it would try to force such a move unilaterally in order to kill the last vestiges of the JCPOA.

“All peace-loving nations must reject Iran’s development of ballistic-missile capable technologies and join together to constrain Iran’s dangerous missile programs,” he stated on Saturday. “As a start, nations should support extending the UN conventional arms embargo on Iran, which is set to expire this October.”

The Secretary of State told David Brody of the Christian Broadcasting Network on Friday that “there will now be more countries that understand what President Trump has understood since he first came into office, that the Iran deal was a crazy bad deal—that we all need to move away from it.”

Pompeo and Risch also leaned on the space launch to justify continued economic sanctions, which have attracted harsh criticism from Congress as the novel coronavirus pandemic ravages Iran.

“We’ve seen the regime try to use the COVID [coronavirus disease] situation to demand that the United States cease its sanctions campaign against Iran on the theory that we were not allowing humanitarian assistance to be reached or medical assistance couldn’t get to Iran,” Pompeo told Tony Perkins of Washington Watch on Friday.

“What [the satellite launch] really tells you is they have that money,” he continued. “But they choose to use it for those systems, to foment terror rather than to feed and to clothe and to provide the medical assistance that the people of their own country need.”

The Iranian government’s coronavirus response budget dwarfs its official military spending, although it is likely that the IRGC spends significant amounts of money off the books as well.

“The Iranian regime continues to prioritize its malign activity over the needs of the Iranian people,” he stated. “In the midst of the COVID-19 [novel coronavirus disease] outbreak and the regime’s pursuit of sanctions relief, Tehran has increased the IRGC budget and diverted limited resources to a satellite launch.”