Will the Trump Administration Try To Kill the Iran Nuclear Deal Once and For All? 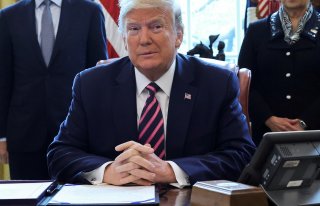 The Trump administration believes that “nations should support extending the UN conventional arms embargo on Iran,” Secretary of State Mike Pompeo announced on Saturday, setting the United States up for a fight with Russia in the United Nations Security Council.

The five permanent members of the Security Council agreed in 2015 to lift economic sanctions on Iran as part of a deal to limit the Iranian nuclear program. President Donald Trump denounced the agreement and imposed what his State Department calls “super maximum economic pressure” on Iran in 2018.

The Security Council is supposed to lift its ban on Iran buying or selling conventional weapons in October 2020 as part of the 2015 agreement. Iran’s surprise launch of a military satellite last week could be an opportunity for the Trump administration to destroy the last vestiges of the deal.

“This satellite launch vehicle and others launched before it incorporates technologies identical to, and interchangeable with, ballistic missiles, including longer-range systems such as intercontinental ballistic missiles,” Pompeo wrote in a statement on Saturday. "All peace-loving nations must reject Iran’s development of ballistic-missile capable technologies and join together to constrain Iran’s dangerous missile programs."

The Secretary of State had said at a Wednesday press conference that the satellite launch was not “remotely” consistent with Security Council Resolution 2231, which implements the 2015 deal.

Brian Hook, the U.S. State Department official in charge of Iranian affairs, had argued at a February briefing that the United States is still defined as a “participating member” in Resolution 2231, and so can stop the Security Council from lifting the arms embargo.

“I think that is something that is available to the United States should it decide to use it,” he told reporters. “We are out of the deal, so our energies are focused on measures that we can do unilaterally.”

The New York Times reported late on Sunday that the Trump administration has drawn up a legal strategy to do just that.

But other Security Council members, including Russia and China, may argue that the United States is no longer a member under Resolution 2231. Russia has already ruled out extending the arms embargo—raising the possibility of a contentious legal fight if Moscow simply ignores declarations from Washington.

Richard Johnson, who served as acting deputy lead coordinator for Iran Nuclear Implementation at the State Department until 2018, is "not convinced" that the United States has the legal standing to force the Security Council to keep the arms embargo alive.

“It depends on how much the Trump administration cares about preserving the United States's role as a neutral arbiter in international spaces,” he told the National Interest. “They might get away with it, but it would be ugly.”

Hook had said in February that “it would be diplomatic malpractice” to allow Iran to re-enter the weapons trade.

Johnson, who now serves as senior director for fuel cycle and verification at the Nuclear Threat Initiative, claimed that the Trump administration is “overdramatizing” the issue.

United Nations resolutions related to Lebanon, Yemen, Libya, North Korea, and other countries would keep Iran from having “carte blanche” to buy and sell weapons, he argued, adding that the threat of a legal fight over the arms embargo could be the Trump administration “trying to put pressure on the Europeans.”

Iran has threatened to break nuclear restrictions on a regular basis in response to U.S. economic pressure—and already has broken some—but European countries are reluctant to punish Iran and throw away the remaining elements of the 2015 agreement.

Iran continues to allow international inspectors to monitor its nuclear program, and the European Union has condemned the Trump administration’s economic pressure campaign.

Britain, France, and Germany triggered the deal’s “dispute resolution mechanism” in January, which could have set in motion a process to re-impose international sanctions within weeks. But the European states have stalled on any further action.

Germany later confirmed that the Trump administration had threatened it with economic pressure in order to trigger the mechanism.