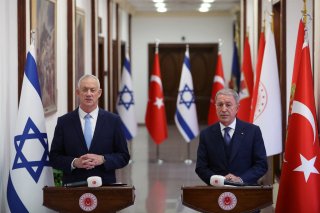 Israeli defense minister Benny Gantz announced on Thursday that his office would restore “working relations” with defense officials in Turkey—a development that occurs amid a broader rapprochement between Ankara and Tel Aviv over the past year.

“As agreed in our meetings, I have instructed my staff to begin the procedures required in order to resume working relations,” Gantz told a press conference alongside his Turkish counterpart, Defense Minister Hulusi Akar, in Ankara. “Moving forward, we must adopt a steady, positive approach in our relations—maintaining open dialogue.”

In a separate meeting with Turkish president Recep Tayyip Erdogan, Gantz emphasized that the security partnership between the two nations would “promote stability, prosperity, and security” in the Eastern Mediterranean and throughout the Middle East, according to a statement released by Gantz’s office.

Although Turkey and Israel have historically been security partners, relations between the two countries have grown strained since Erdogan rose to power, a vocal supporter of Palestinian statehood. In 2010, the Israeli Defense Forces (IDF) raided an international flotilla of ships attempting to break the country’s blockade of the Gaza Strip, killing nine Turkish civilians and prompting Ankara to expel Israel’s ambassador and recall its own. Although the two countries restored their ambassadors in 2016, they were recalled once again in 2018 after violence between Israeli security forces and demonstrators in Gaza.

Over the past year, Erdogan has attempted to improve his relationships with several Middle Eastern nations, including Israel, Saudi Arabia, and the United Arab Emirates. Israeli president Isaac Herzog visited Ankara in March, the first Israeli head of state to do so since 2003, and Ankara and Tel Aviv restored their respective ambassadors in August. In June, Turkish police foiled an alleged plot by Iranian agents to assassinate Israeli tourists in the country, leading to public thanks from then-incoming Prime Minister Yair Lapid.

In his remarks, Akar emphasized that Israeli-Turkish cooperation was in the best interests of both nations and could allow Turkey to “facilitate the resolution of some issues on which we have disagreements, especially on Palestine.”

A former paratrooper and general in the IDF, Gantz has held the position of defense minister since 2020. He also leads the centrist Blue and White political party in the Knesset and is a leading candidate for prime minister in Israel’s upcoming parliamentary elections on November 1.

Turkey’s next presidential election will be held in June 2023. Erdogan is expected to run for re-election against a candidate from the “Nation Alliance,” a big-tent coalition of Turkish opposition parties.