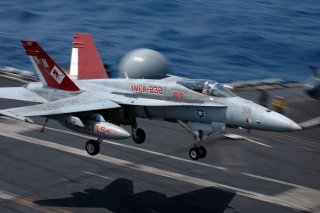 The latest statements followed a tense showdown in the Persian Gulf between Iranian and U.S. vessels. The President has escalated against Iran without much warning, ordering the killing of Maj. Gen. Qassim Suleimani in a surprise airstrike in January. But he has also made statements that U.S. military leadership later walked back, including a January message on Twitter threatening to strike Iranian cultural sites.

“I have instructed the United States Navy to shoot down and destroy any and all Iranian gunboats if they harass our ships at sea,” Trump wrote on Twitter on Wednesday morning.

Norquist seemed to imply that Trump’s message was not a change in U.S. policy.

“The President issued an important warning to the Iranians,” he told reporters at a Wednesday briefing. “What he was emphasizing is all of our ships retain the right of self-defense.”

Iran initially claimed that the incident was in response to U.S. fighter jets attempting to breach Iranian airspace, a claim that U.S. Central Command denied to the National Interest.

Iranian naval commander Rear Admiral Alireza Tangsiri later claimed that “the Americans blocked the way for our vessels and refused to respond to the radio, which was met with a powerful confrontation by our forces.”

The Persian Gulf has seen a long history of incidents between the United States and Iran, including confrontations similar to last Thursday’s maneuvers. The two countries nearly went to war in July 2019 when Iran shot down a U.S. surveillance drone over the Gulf and Trump ordered retaliatory airstrikes.

Trump administration officials have made “restoring deterrence” the catchphrase of their policy towards Iran.

"Restoring deterrence is not static. It is a daily habit, and you've got to get that habit as part of your system, so we every day look for ways to get Iran to go back to its own borders," Brian Hook, the State Department official in charge of Iranian affairs, said at a February briefing.

U.S. officials at the Wednesday briefing also corroborated Iran’s claims to have launched the country’s first military satellite, although they did not confirm or deny whether the satellite was successfully put into orbit.

“What I can tell you is it went a very long way,” said Gen. John Hyten, vice chairman of the Joint Chiefs of Staff. “It has the ability once again to threaten their neighbors, our allies, and we want to make sure they can never threaten the U.S.”

Secretary of State Mike Pompeo said that Iran will be held “accountable” for the satellite launch at his own press conference.