Rep. Estes: The United States Should Be ‘More Active’ In Targeting Hezbollah Allies 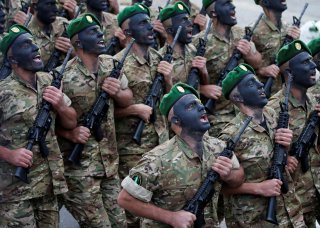 The United States should “make sure the bad guys are properly sanctioned and properly addressed” in Lebanon, Rep. Ron Estes (R–Kansas) said on Thursday.

The current government of Lebanon includes Hezbollah, a militant Iranian-backed party considered a terrorist group by the United States. U.S. sanctions currently target Hezbollah’s sources of financing abroad, but a recent proposal to bring the fight to Lebanon by putting sanctions on Hezbollah’s parliamentary allies has been gaining steam in Washington.

Estes was asked about the proposal at a Thursday event hosted by In Defense of Christians, a Washington-based advocacy group for religious minorities in the Middle East.

“That’s something we need to be more active, more selective, and more engaged on,” he said. “Hezbollah has not shown any indication that it wants to assimilate.”

Lebanon’s current government was formed after protesters forced then-Prime Minister Sa’ad Hariri to step down last year but is backed by many of Hariri’s old coalition partners, including Hezbollah, another Shi’a Muslim party called the Hope Movement, and a Maronite Catholic party called the Free Patriotic Movement.

Sanctioning corrupt individuals from these parties would be a way of “containing Iran without saying directly that these are Hezbollah sanctions,” said Hanin Ghaddar, a co-author of the January article and a visiting fellow at the Washington Institute for Near East Policy.

“The most corrupt people are Hezbollah’s allies,” she said. “Hezbollah is only powerful because of these guys.”

Many in the protest movement that had brought down Hariri have condemned the Hezbollah-backed cabinet as a “Halloween government,” a thinly-veiled front for the old ruling class. Their demonstrations were put on hold when the coronavirus crisis forced a lockdown in mid-March, but flared up again last week.

Hungry demonstrators took to the streets across Lebanon for the first time since a coronavirus lockdown was imposed. Protesters burned banks and the Lebanese military shot at least one demonstrator dead.

“The street in Lebanon is definitely hurting Iran’s influence,” Ghaddar had told the National Interest in January.

The Trump administration has made it clear that it wants to degrade Hezbollah’s influence as part of a broader campaign against Iran and its regional allies, but it has not yet targeted the group’s partners in Lebanon.

“Right now, I think they’re holding their fire because of how delicate the situation is,” said Jean AbiNader, chair of the Communications Committee of the American Task Force for Lebanon.

But the Trump administration signaled that it has an eye on Hezbollah’s parliamentary activities in an April 30 statement, after Germany designated Hezbollah a terrorist organization at the urging of the United States.

“With this action, Germany joins the growing ranks of nations that reject the false distinction between [Hezbollah’s] terrorist operations and a purported ‘political’ wing,” U.S. Secretary of State Mike Pompeo wrote. “We urge other [European Union] member states to follow suit and hold [Hezbollah] accountable for its terrorist activities.”