Will Coronavirus Collapse Lebanon—And Will It Be Iran’s Fault? 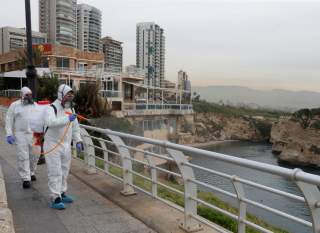 Lebanon confirmed its second death from the coronavirus on Wednesday as it struggles to stave off economic and political collapse.

The small Mediterranean republic is facing a cascading series of crises, culminating in the government defaulting on its sovereign debt earlier this week. The Lebanese health-care sector has taken a serious hit from the country’s ongoing financial crisis as the U.S.-Iranian conflict has caused pro-Iran factions to dig in their heels on repairing the country’s economy.

“The whole world today is confronting this challenge and the government has not dithered on any action for the protection of the Lebanese people,” said Prime Minister Hassan Diab in a Wednesday statement. “There are those who resort to political score-settling, although the issue requires everyone to rise up to the level of national responsibility at this sensitive stage because protecting the Lebanese people is the demand.”

The crisis could also be an opportunity for the central government to win back legitimacy—and it may cast Hezbollah, the pro-Iran political party that currently runs Lebanon’s health ministry, in a negative light.

“The public health system is not very well-resourced,” said Jean AbiNader, communications chair for the American Task Force for Lebanon, but the country has “a very strong professional class” that could be mobilized to deal with the pandemic.

AbiNader noted that the Lebanese people could stop relying on sectarian elites, particularly Shi’a Muslim elites, if “the government can get its act together and provide services.”

Hezbollah, which is listed as a terrorist group by the United States, serves as a state-within-a-state for parts of Lebanon’s Shi’a Muslim community. But the group’s finances have taken a hit due to the U.S. “maximum pressure” campaign on Iran, which has both reduced Iran’s ability to support its regional allies and targeted the party’s backers inside the country.

Mass protests against corruption by Lebanon’s sectarian elites had forced ex-Prime Minister Saad Hariri to resign in October. His replacement, the independent Hassan Diab, promised to govern as a reform-minded “technocrat” after taking power in January. But his cabinet has been dominated by Hezbollah and the Free Patriotic Movement, a Maronite Catholic party.

“The very formation of the current cabinet was done with no transparency,” said Bilal Saab, director of the defense and security program at the Middle East Institute. “They’re more like a front for the usual oligarchs and sectarian leaders.”

And it allowed the Lebanese government’s unsustainable spending to continue.

Diab’s cabinet failed to scrounge the funds it needed to make a $1.2 billion bond payment due Monday. Now, a deadline is looming for Lebanon to accept an International Monetary Fund (IMF) bailout to salvage the country’s economy.

Hezbollah may block this lifeline.

The IMF has not yet announced its conditions for Lebanon, but the Washington-based organization has previously asked governments to raise taxes, cut subsidies, tp crackdown on corruption, and to downsize government agencies.

Jordanians rose up in protest after their own government imposed new taxes and steep gas price hikes in 2018 in order to secure a loan from the IMF.

Hassan Fadlallah, a member of parliament for Hezbollah, told Reuters last week that the IMF’s anticipated demands from Lebanon would “lead to a popular revolution,” although Hezbollah is not opposed categorically to working with the group.

Saab explained that Hezbollah sees the IMF as a form of “U.S. interference.”

The coronavirus could push the country into a more dire economic crisis, increasing the pressure to accept the IMF’s help. The Lebanese government announced that it was closing cafes and restaurants on Wednesday to slow the spread of the virus.

And it finally canceled all flights from Iran, which is facing the worst coronavirus outbreak in the Middle East. The last flight from Iran to Lebanon touched down at 8:45 p.m., according to the local news station MTV Lebanon.

The Lebanese government had already banned the entry of Iranian nationals in late February, but many Lebanese citizens regularly travel to Iran, including religious pilgrims and seminary students.

Qom, home to one of Shi’a Islam’s most important shrines and a hub of religious scholarship, is at the epicenter of the coronavirus outbreak in Iran.

Iran has confirmed nine thousand cases of coronavirus and 354 deaths from the coronavirus disease as of Wednesday night, including sixty-three deaths in the past day.

The diplomatic impasse worsened on Tuesday when U.S. Secretary of State Mike Pompeo appeared to place a possible condition on foreign aid to Iran.

“Any nation considering humanitarian assistance to Iran should seek the release of all dual and foreign nationals,” he said in a statement. “As COVID19 spreads to Iranian prisons, their detention defies basic human decency.”