Saudi Arabia-Pakistan Relations Will Never Be the Same Again 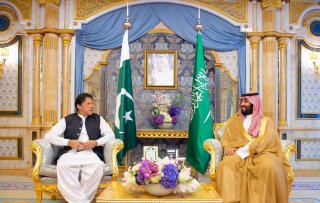 The rapidly evolving geopolitical developments in the Middle East are also transforming the historic and strategic Saudi-Pakistan relations. The Saudi-directed recognition of Israel by various Middle Eastern countries and Islamabad’s reluctance to follow suit is straining its ties with Riyadh to New Delhi’s advantage. Israel’s recognition by the Arab countries is potentially increasing India’s economic and political space in the Middle East and squeezing that of Pakistan.

Against these developments’ backdrop, Riyadh is signaling to Islamabad that there will be no more free lunches. In return for financial bailouts and employment opportunities, the kingdom expects Pakistan to take unequivocal pro-Saudi political positions. Despite massive layoffs and sluggish economic growth due to the Covid-19 pandemic, Pakistani blue-collar workers’ remittances from Saudi Arabia form, among others, the largest portion of the country’s external financial inflows.

The maiden visit of the Indian army chief General Manoj Mukund Naravane to Riyadh against the backdrop of Pakistan’s repayment of another $1 billion of the $3 billion loan to Saudi Arabia and the deportation of several thousand illegal Pakistani workers is unprecedented. Moreover, the United Arab Emirates’ decision not to renew the work visas of several Pakistani workers is noteworthy. In a way, these events indicate that Pakistan’s traditional policy of balancing its ties between the Sunni Arab countries and Iran has run its course.

If history is any guide, it is unusual for Saudi Arabia to demand repayment of its loans from Pakistan. The harsh gesture is intended to convey the kingdom’s extreme displeasure towards Islamabad. The repayment of $1 billion was part of the $6.2 billion package which Pakistan secured in late 2018 to shore up its dwindling foreign exchange reserves. Of the $6.2 billion financial package, $3 billion was in soft loans with 3.2 percent interest payable, and $3.2 billion was in oil credit facility for one year with a roll-over option for three years.

Saudi Arabia’s stick-and-carrot approach towards Pakistan by simultaneously rejecting and, at times, accommodating Islamabad’s demands is part of its hedging strategy. For instance, the kingdom rebuffed Islamabad’s request of convening a meeting of the Organisation of Islamic Conference (OIC)’s Council of Foreign Ministers on Kashmir in July by demanding repayment of $1 billion. However, the November 28-29 OIC-Council of Foreign Ministers summit in Niger issued a strong-worded statement on Kashmir accommodating all the Pakistani demands. The Saudi outreach to India is also part of the hedging strategy against Pakistan for its reluctance to recognize Israel, its stand-offish policy on Iran, and the refusal in 2015 to contribute troops to the Saudi-led war in Yemen.

Arguably, Riyadh is indicating to Islamabad that continued strategic and economic engagement is possible but under a new paradigm where mutual demands and expectations need to be redefined. In doing so, the kingdom is also laying bare the potential political and economic costs of defiance and neutrality.

The young Saudi leadership seems nervous and shaky ahead of President-elect Joe Biden’s swearing-in on January 20. Under the Biden administration, the Joint Comprehensive Plan of Action’s potential restoration, even if it is a watered-down version, would be Riyadh’s nightmare. The Yemen war has turned out to be Saudi Arabia’s Vietnam, thanks to the overt Iranian support to the Houthi rebels. Concurrently, Pakistan’s growing closeness with Iran under the Chinese Belt and Road Initiative is further adding to Riyadh’s frustration. Recently, Pakistan and Iran have opened the first border point between the Gwadar and Chabahar ports to enhance the economic ties.

Likewise, Pakistan’s proximity with Turkey has also angered the Saudis. Turkish President Recep Tayyip Erdogan has disputed the Saudi’s leadership of the Muslim world. In December 2019, Pakistan had to pull out of the Kuala Lumpur Summit, jointly hosted by Turkey, Qatar, Iran, and Malaysia, at the eleventh hour due to Saudi pressure. The Summit was deemed a challenge to the Saudi’s leadership of the Muslim world. In recent years, Ankara and Islamabad have deepened their cooperation in the security and economic sectors. Turkey is keen to invest in the China Pakistan Economic Corridor as well. Above all, Ankara, unlike Riyadh, provides Islamabad with unconditional support on Kashmir.

The downward trajectory of bilateral ties is likely to continue in the short to medium term. However, a clean break is unlikely for the following reasons.

Second, Pakistanis form the second largest group of immigrant workers in Saudi Arabia. Though Riyadh has deported tens of thousands of Pakistani workers lately, it will not be easy to replace them entirely. Saudi Arabia is unlikely to get such cheap labor who devoutly love the country for spiritual reasons. Furthermore, Pakistani workers have years of working experience in Saudi Arabia’s hot climate and unforgiving terrain. It won’t be easy for others to adjust to this hot climate.

Third, the Hajj and Umrah form 20 percent of the kingdom’s non-oil annual revenue. Each year, around 600,000 Pakistanis perform Umrah and 250,00 perform Hajj. With oil profits dwindling, Riyadh cannot afford to alienate Pakistan to lose this steady stream of annual income.

Hence, a complete rupture of the Saudi-Pakistan ties in the foreseeable future is unlikely. Pakistan’s relations with Saudi Arabia and the UAE will weather the above-mentioned tensions, but they will transform from strategic to tactical and transactional relations.

Abdul Basit​ is a research fellow at the S. Rajaratnam School of International Studies, Singapore. He tweets @basitresearcher.