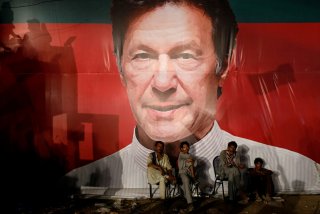 There is an unfortunate tendency in U.S. strategic circles to compartmentalize by geography: China watchers look at China, but for too long ignored its inroads in Africa and the Americas. Russia specialists watch the Kremlin but ignore Moscow’s inroads far beyond Russia’s borders. The Middle East, meanwhile, may have been the focus of U.S. strategy for the past quarter-century, but both the State Department and Pentagon divide it between European, Near Eastern, and African bureaus. Simply put, not everything conforms neatly to a U.S. bureaucracy notoriously unwilling or unable to adjust to the world around it.

So it is with recent Middle East peace moves. What is happening in Arab-Israeli peace is historic, and no amount of partisanship in Washington can credibly detract from it. But as momentous as the slow collapse of the Arab-Israeli conflict and the strategic reorientation within the Middle East is, its impact on South Asia will also be momentous. While India increasingly embraces the new order, however, Pakistan’s reactionary rejection of Saudi Arabia’s peace moves may raise new challenges for the United States and regional security.

There can be no mistaking the importance of the strategic realignment in the Middle East. The decision first by the United Arab Emirates and next Bahrain to normalize relations with Israel formalize a détente that has been years in the making.  All indications are that Saudi Arabia could be next. Put another way, Israel waited thirty years for the first Arab-Israeli peace agreement; it took another fifteen years for the next, and another quarter-century for Abu Dhabi to formalize peace with Jerusalem. Now, the space between agreements is being measured in days and weeks rather than years and decades.

Whereas cash greased peacemaking with both Egypt and Jordan, the recent peace deals are more ideological. Arab capitals are recognizing Israel because they want to, not simply because they need money. Iran, of course, is a major reason for the change. From its foundation, the Islamic Republic of Iran has sought Israel’s genocidal eradication as core policy. While Iran’s post-revolutionary policy toward the Gulf Arab states has been more nuanced, the Iranian government’s willingness to export revolution throughout the Middle East and incite unrest in Bahrain, Kuwait, and Saudi Arabia had led Gulf states to view the Iranian regime as a fundamental challenge. Saudi Arabia has further suffered repeated and direct attacks by Iranian proxies in Yemen. Sudan, which once pledged firm rejection of negotiations with let alone recognition of Israel now seeks to join the moderate camp. Iraq, once home to the most radical Palestinian factions, may not have peace with Israel on its agenda, but no longer seeks to obstruct it either.

Other countries are coalescing into a more rejectionist camp against the new order. Turkey, once a part of a pro-Western democratic and counter-terror bloc, now is a state-sponsor of terrorism in all but name. Qatar increasingly positions itself as the banker to the rejectionist bloc. The Palestinian Authority, meanwhile, is doubling down on its rejectionism, an attitude which the European Union subsidizes.

Washington already struggles for how to address the new realities as one-time allies and hosts to U.S. forces make common cause with anti-American terrorist groups. The Middle East realignment, however, may also reverberate through South Asia, albeit not in entirely positive ways. Certainly, Israel and India have already broken the ice, notwithstanding India’s substantial economic ties to Iran. Saudi Arabia’s pivot toward the peace bloc, however, is causing Pakistan to move the other direction and to seek solace in the newly-coalescing radical bloc.

This may not entirely surprise. Pakistan is among the world’s most anti-Semitic countries, never mind that it has no Jewish community and few Pakistanis have ever met a Jew. That intolerance is a legacy of Saudi-funded religious seminaries, charities, and political assistance. Perhaps the student has now become the teacher: As Riyadh grows closer to Jerusalem, the Pakistani political leadership recoils, even at the expense of its long partnership with Saudi Arabia.

What was once below the surface now peculates openly. On August 5, 2020, Pakistani foreign minister Shah Mahmood Qureshi launched a tirade against Riyadh for Saudi Arabia’s procrastination on convening an Organisation of Islamic Cooperation (OIC) foreign minister meeting on Kashmir and the Israel-United Arab Emirates peace deal. Riyadh has its own grievances: Saudi officials were also reportedly apoplectic at Pakistani prime minister Imran Khan’s appeal to ease sanctions on Iran. They are also upset that Pakistan treats Iran’s demands as equally legitimate to Saudi Arabia’s in diplomatic mediation.

Last month, Pakistan dispatched Qamar Javed Bajwa, the chief of the Army Staff, and Faiz Hameed, the director-general of the Inter-Services Intelligence, to Riyadh to conduct damage control. It did not work. That Saudi Crown Prince and Defense Minister Muhammad bin Salman did not receive them shows the depth of Saudi anger.

This may soon change. Within Pakistan’s leadership, there is now a debate about whether to continue Pakistan’s tilt toward Saudi Arabia or instead, pursue anything for Kashmir strategy and privilege Iran, Turkey, and Qatar.

Alas, the rejectionist camp within Pakistan appears to be winning the argument. They see in Turkey a willing partner to make Kashmir a religious imperative rather than a diplomatic issue. Turkish president Recep Tayyip Erdoğan, meanwhile, hopes to leverage Turkish-Pakistani solidarity on Kashmir into Pakistani acceptance of his broader anti-Saudi obsession.

Pakistan may see in Erdoğan and perhaps Iran a substitution for recent diplomatic losses:  Malaysia is quiet now that Mahathir Mohamad is out of power. The new government both has different perceptions about its role in the world and is mindful of more immediate Malaysian interests: India is the largest buyer of Malaysian palm oil. Democratic Party nominee Joe Biden has quieted his criticism of the extension of Indian law to Kashmir as he courts Indian-American votes, a constituency energized by his choice of Kamala Harris, whose mother is Indian. Pakistan was livid, meanwhile, with Saudi Arabia efforts to win a $15 billion deal to build an oil refinery in India. As Haqqani notes, Pakistan-Saudi trade is “a meagre $3.6 billion, Saudi trade with India has risen to $27 billion and is expanding further.”

Husain Haqqani, a former Pakistani ambassador to the United States and now a scholar at the Hudson Institute noted that Pakistan was putting ideology above more pragmatic concerns: “The Saudis do not look kindly upon ultimatums and will be especially offended when it comes from a country that has frequently sought economic bailouts from the Kingdom.” At issue is not only Saudi subsidies but also Saudi Arabia and Pakistan’s decades-long military ties as well as the remittances which Pakistani workers send home from their Saudi jobs.

The U.S. State Department and Pentagon must recognize the import of Pakistan’s shifting alliances. Pakistan’s sponsorship of terror against India and Afghanistan is already problematic, and the U.S.-Taliban deal only empowers radical Islamists further and formalizes their de facto safe-haven. To then tie Pakistan more deeply into the Turkey and Qatar anti-peace Middle East bloc means those same groups might soon become more involved in undercutting peace and security in the Middle East. Countries that prioritize ideology above both peace and their economic development tend to spiral downward into ever more radical postures as they seek to distract from their own failings. It seems strange to consider, but Saudi Arabia is quickly becoming a moderating force in the region. For Pakistan to recoil from that moderation bodes ill for its future.