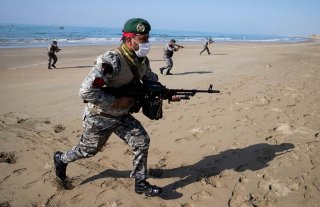 The State Department-led maximum pressure campaign against Iran has revealed serious fissures between the Trump administration and the E3, the United Kingdom, France, and Germany. Not only have the Europeans refused to join the economic-sanctions campaign, but more recently they rejected Secretary Mike Pompeo’s attempt to extend the arms embargo against Iran.

The campaign also has underscored Iran’s resiliency as the world’s leading state sponsor of terrorism. Despite the political and economic failure of its proxy states, like Lebanon, Syria, and Yemen, Iran continues to find means to reinforce its proxies. Indeed, economic sanctions have made a significant impact on Tehran, but the regime has proven time and again that it can live another day.

Having lived under sanctions for nearly forty years, Iran is adept at surviving tough economic conditions. The maximum pressure campaign needed a supplement to the larger strategy that would augment economic sanctions. As a tool of foreign policy, sanctions by themselves are not a means to an end. A strategy towards Iran requires a more calibrated and comprehensive approach—one that the Iranian regime would not anticipate.

In the face of all of this, President Donald Trump has made history. In a span of thirty days, this administration has facilitated the normalizing of relations between Israel and two major Arab players: the United Arab Emirates (UAE) and the Kingdom of Bahrain. These swift normalizations between Arab states and Israel could be the start of a regional strategy that will corner Iran. More importantly, this is the type of strategic maneuvering that leaders in Iran did not see coming.

With President Trump’s full endorsement, White House Senior Advisor Jared Kushner and his team have crafted a grand plan for Middle East peace that is being realized in powerful parts. Instead of attempting to persuade transatlantic critics or further penalize Tehran, Kushner has been pursuing a regional diplomatic strategy since 2017. The true power of this strategy has come to light with Arabs and Israelis sign unity and recognition agreements.

Normalization with Israel has a strategic bent. Egypt, Jordan, the UAE, and Bahrain, are all power players in the Middle East. It is doubtful that Bahrain would have moved toward normalization without the tacit approval of Saudi Arabia. These countries collectively have enough clout to usher in an era that defines Arab unity and creates a barrier for Iran’s regional ambitions. Working towards Arab unity will overtime negate the Iranian vision of revolutionary zeal, and diminish proxy elements.

Starting with Israel and the UAE, the Abraham Accords are normalization agreements that formalize relations between Israel and Arab states and eases restrictions on the movement of people and commerce throughout the region in ways that were unimaginable just a few months ago. As Jews and Arabs see a deeper and clearer stake in shared prosperity, peace, and opportunity, it will be a lot more difficult to divide them through terrorism and other measures Tehran has refined to foment crises and divisions throughout the broader Middle East.

Iraq, too, is a part of the Trump administration’s Middle East strategy. Since the 2003 U.S. invasion of Iraq, Baghdad has had tense relations with its Arab neighbors, most notably among the Gulf Cooperation Council states. Iran gained the trust of political and military leaders in Baghdad, which overwhelmed every Iraqi prime minister since Nouri al-Maliki opened a path for Iranian entry. Iranian influence in Baghdad has been the point of contention with Iraq’s Arab neighbors.

Iraq struggled to find opportunities to expel Iranian influence, until Mustafa al-Khadimi. Since taking office in May 2020, al-Khadimi has shown promise in engaging with the United States on foreign policy issues, particularly on Iran.

As part of the Strategic Dialogue between the United States and Iraq on August 19, 2020, the U.S. reiterated support for Iraq’s economic reforms, especially in the energy sector. Plans addressed increasing Iraq’s electricity and gas production, but more importantly, inked energy agreements with U.S. companies including General Electric, Honeywell UOP, and Stellar Energy. Iraq also signed a Memorandum of Understanding with Chevron and Baker Hughes that showcase the U.S.-Iraq energy partnership.

These deals are worth at least $8 billion, which would ultimately wean Iraq off of Iranian energy dependence. Trump echoed this partnership with Al-Khadimi at the White House on August 20, 2020, while also acknowledging the threat of Iranian influence. Nowhere else in the Middle East are Iranian proxies more prevalent than in Iraq. The late Qods Force Commander Maj. Gen. Qassim Suleimani entrenched Iraq with a Shia militias to fight on behalf of Iranian ideals. These groups remain prominent across the country and are an increasingly challenging threat to U.S. interests.

Integrating Iraq economically within the region is a holistic approach to pushing Iranian influence out. Without trade and energy dependency on Iran, Tehran will be forced out of Baghdad, especially if Iraq can forge economic partnerships with its neighbors.

Iraq, the UAE, and now Bahrain have successfully established independent economic partnerships that would benefit their respective populations, and these partnerships will facilitate positive engagements beyond their borders. Focusing on pathways towards partnerships by overlooking differences can lead to stability and act as an obstacle for Iran’s tentacles in the region.

Deft diplomacy by Jared Kushner and other administration colleagues is contributing to the very Arab unity that will diminish Iran as a regional threat. Finding common ground has brought unity among Arab partners who have long vowed against Israeli normalization until a two-state solution has been resolved with Palestinians. Normalizing relations with Israel can show that peace in the Middle East is possible, and it is not an abandonment of Arab principles.

Alma Keshavarz is a post-doctoral fellow at the Institute for Politics and Strategy at Carnegie Mellon University, and previously served in the Office of Policy Planning at the Department of State where she covered Iran and Iraq.

Kiron Skinner is the Taube Professor at Carnegie Mellon University, where she directs the Institute for Politics and Strategy, and a Research Fellow at the Hoover Institution. She previously served as the Director of the Office of Policy Planning at the State Department.