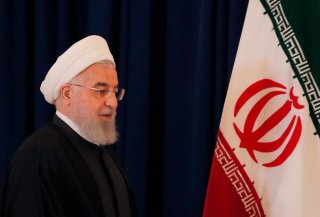 Iran’s Look East and China’s March West approach confluence in the Middle East. Beijing’s “wary dragon” strategy may not stay so wary in the Middle East with its growing power and influence; particularly in the age of the U.S. declining engagement in the region.

The United States’ miscalculated invasion of Iraq in 2003, followed by the so-called Arab Spring chaos, has critically changed the Middle East’s security architecture. The two historical events have altered the interstate balance of power, and led to an intrastate security vacuum, to be filled by transnational sectarian armed groups, often sponsored by the regional powers.

The lack of clear strategy, the ongoing insecurity, the rise of hostile actors, and the high cost of wars have further undermined Washington’s ability to manage the new Middle East security architecture. As such, the U.S. inability to adapt to new regional dynamics enabled Iran to fill the void and to advance its regional influence to the disadvantage of the United States. Now, Iran is inviting China to join.

While no one can cast a shadow of doubt to the complexity of the sweeping economic and security partnership between China and Iran, yet should it be realized, it will have regional, extra-regional and international implications. To better comprehend Iran-China strategic proximity and its possible consequences, it is, therefore, necessary to look at it in the context of global and regional developments and prognosis of the great power politics in the foreseeable future.

China, since the early 2000s, has adopted a new approach to its grand strategy of the “great rejuvenation of the Chinese nation.” The approach entails Beijing’s willingness to act globally with greater assertiveness. Beijing hence set a special agenda for raising China’s profile on the international stage by promoting the “Chinese Dream” discourse.

Concurrently, the U.S. 2018 national defense strategy has clearly called China a revisionist competitor seeking to reshape global order, starting with reordering the Indo-Pacific region to its advantage. Washington has also adopted a containment policy against Iran’s nuclear and regional policies. The new Sino-Iranian strategic agreement undermines U.S. attempts to minimize the influence of China and Iran in the Middle East.

The Sino-Iranian strategic proximity suggests that security and threat perception will be revisited and new patterns of partnership reshape the geopolitics of the region. Unlike the United States, China enjoys the non-interventionist history in the Middle East; it has not defined supporting Israel as its key national security goal, it has initially economic approach, and has intentionally avoided involving in binary relations—with us or against us—with countries of the region.

Regional policymakers also perceive Beijing as a benign, nonthreatening actor. China, instead, has been attempting to protect its overseas interests by implementing a developmental approach, adopting the “friend to all, enemy to none” policy. To be a realist, China’s approach, in such a conflictual region, may not stay pacifist and economic, but as power grows, it will shift to rather political and security attitudes.

The Chinese-Iranian initiative permits Iran to resist U.S. pressure, both economically and politically, and to further expand its influence in the Middle East. Iran has pragmatically utilized the ongoing developments in the region to enhance its position and to involve non-western major powers to engage in the Middle East’s security equations, like Russian-Iranian alliance in Syria, and the recent Chinese-Iranian-Russian naval exercise in the Gulf of Oman.

Iran-China strategic proximity also affects the balance of power in South Asia with particular consequences for India, as an emerging pro-U.S. regional power. The deal would have political, security and economic implications to the detriment of New Delhi. Just a few days after the alleged document of China-Iran partnership leaked, Iran decided to remove India from the Chabahar-Zahedan strategic railway project which connects the Indian Ocean to Afghanistan. Should China replace India in strategic railway and port development projects in Chabahar and Jask, it hinders India’s dream of connecting Bombay to Moscow via the North-South International Corridor.

Besides, the bilateral agreement provides Beijing with a great opportunity to participate in constructing the strategic port of Jask, situated to the east of the Strait of Hormuz. Not only can China’s presence in the Jask development project eliminate any potential chance for India to take part in this lucrative program, but China’s wider presence on the main energy transmission route could also jeopardize India’s energy security.

Moreover, Sino-Iranian strategic partnership provides new opportunities for Pakistan, India’s key rival in South Asia. Such regional interconnectedness leads to further security cooperation between Beijing, Tehran and Islamabad and to advance China-Pakistan Economic Corridor. The Corridor is part of China’s ambitious Belt and Road Initiative (BRI), aimed at connecting Gwadar port with China. China’s investment in Chabahar port and connecting it to Gwadar provides China access to Central Asia, and Europe through Iran. The idea of integrating Tehran into the BRI through expanding PCEC to Eurasia via Iran makes the foundations of the triple-axis of China-Iran-Russia, all of which have much in common against the U.S. global hegemony.

Considering extensive recent U.S.-China power competition, Beijing’s presence in the region entails extra-regional implications too. It provides China the opportunity to monitor the Strait of Hormuz, to challenge U.S. naval dominance in the Persian Gulf and to shape a network of strategic hubs in the Indian Ocean, Persian Gulf, the Gulf of Oman, and Gulf of Aden consisted of Djibouti, Gwadar, Chabahar and Jask. Building such a network at least balances U.S. power projection in Indian Ocean and paves the way to rewrite its regional security order. That is what Chinese strategic literature has called “March West” and 2019 U.S. Indo-Pacific Strategy has mentioned it as China’s effort to rewrite the order of the Indo-Pacific region.

Meanwhile, Iran desires to expand its naval forces to the Indian Ocean according to its doctrine of strategic depth expansion. Last June, Iran’s Supreme Leader Ali Khamenei tasked the Islamic Revolutionary Guards Corps with setting up a permanent presence “in waters far away from the country.” The IRGC has hence announced that it is going to establish a permanent military base in the Indian Ocean by the next March; Demonstrating Iran’s defense-in-depth doctrine expansion from the Persian Gulf to the Arabian Sea, and now to the Indian Ocean.

One of China’s incentives to strategically forge ties with Iran and expand its presence in the Persian Gulf and the Gulf of Oman could be to respond to the U.S. efforts to balance Chinese power in East Asia employing external balancing policy. External balancing means neutralizing a rival’s power by relying on the ability of allies. In response, China has sought to expand its political theater to the Indian Ocean and Persian Gulf, thwarting U.S. efforts to contain it by building a network of strategic hubs in the region that has traditionally been the sphere of the U.S. influence.

While U.S. policy toward the Middle East has changed in the last decade or so, it has failed to provide an alternative to fully protect its regional interests. China is taking advantage of Washington’s lack of strategic policy in the Middle East, and is stepping up to strengthen its position. China’s 2019 Defense White Paper has emphasized on its overseas interests as an indispensable part of its national security. In the age of U.S. relative decline of power, reluctance in engaging with serious issues in the region, and significant military withdrawals, whatever gaps the United States may leave behind, shall be filled by the Chinese and Iranians.

Reductionist viewpoints that look at the bilateral partnership agreement between China and Iran as a mere diplomatic effort without considering regional and global calculus neglect the broader geopolitical consequences in the region and beyond. Sino-Iranian proximity moves beyond bilateral relations and economic sphere, enabling them to rewrite regional and global order; it’s just a matter of time. As Deng Xiaoping once put it: “It doesn’t matter whether the cat is black or white, as long as it catches mice.” China, calmly and steadily, secures its position in the Middle East; Iran is helping.

Alam Saleh is a Lecturer in Iranian Studies at Australian National University, Center for Arab and Islamic Studies. He is also a Council Member of the British Society for Middle Eastern Studies.

Zakiyeh Yazdanshenas is a research fellow at the Center for Middle East Strategic Studies. Her expertise mainly focuses on the Great Powers rivalries in the Middle East.

Image: Reuters.
Editor's Note: This piece has been updated to correct a technical glitch.