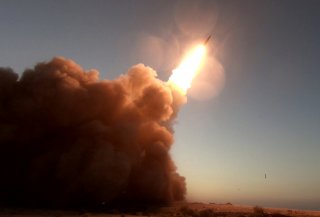 Multiple sources reported earlier this week that a German state intelligence agency has confirmed that the Iranian government was seeking to acquire weapons of mass destruction (WMD) technology and ballistic missile systems. Saarland’s Department for the Protection of the Constitution said the Islamic Republic was one of three foreign countries that sought to advance its WMD program on German soil.

“Iran, Pakistan and to a lesser extent Syria, made efforts to procure goods and know-how for the further development of weapons of mass destruction and their delivery systems,” wrote the intelligence officials for the Saarland reported The Jerusalem Post.

“Delivery system” would refer to the capability to launch missiles. Israel, the United States and many Persian Gulf nations all believe Iran has continued to seek to develop nuclear weapons and could obtain such technology by the end of this year.

Germany, along with France and Great Britain, has supported the Joint Comprehensive Plan of Action (JCPOA), known commonly as the Iran nuclear deal or Iran deal.

Multiple German intelligence reports have also confirmed that Tehran sought to purchase components used in the development of nuclear and missile weapons in 2019.

Saarland's Department for the Protection of the Constitution is just one of the domestic intelligence services. Each of the sixteen German federal states has its own intelligence agencies, and each issues an annual report that documents threats to the state's democratic system.

A report from the Baden-Wurttemberg state intelligence agency also reported that “countries like Iran, Pakistan and North Korea are making efforts to optimize corresponding technology,” Asharq Al-Awsat reported on Sunday.

An additional report from Baden-Wurttemberg on the proliferation of atomic, biological and chemical weapons also revealed how those countries listed above have continued illegal procurement efforts in Germany to perfect the range, deployability and even the impact of the respective weapons.

Saarland’s intelligence service also noted the apparent illicit nuclear weapons of Pakistan in Germany and abroad and reported, “Pakistan also operates an extensive nuclear and carrier technology program and continues to endeavor to expand and modernize, in order to retain a serious deterrent potential against the ‘Arch enemy’ India.”

Many experts believe Pakistan's nuclear stockpile has been steadily growing, and the German report only confirms such concerns.

The Saarland agency also reported that Iran—along with China—is replicating Russia's tactics to target dissidents and opponents within Germany.

“The intelligence staff there (Iran), supposedly working as diplomats or journalists, conduct open or covert information gathering themselves or provide support in intelligence operations that are carried out directly by the headquarters of the intelligence services in their home countries. In addition, intelligence services also carry out operations without their legal residences being involved. The focus of their respective procurement activities is based on current political requirements or economic priorities.”

The Jerusalem Post also reported that Tehran has used German territory for surveillance and assassination operations targeting Iranian dissidents, pro-Israel advocates and Israeli and Jewish institutions. The Islamic Republic's Ministry of Intelligence and Security has been known for its secrecy and efficiency, and now it appears that it has taken root—deep roots at that—within Germany.