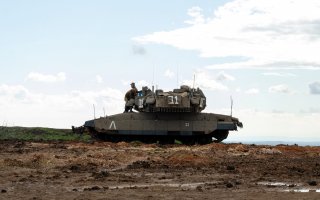 Key Point: Israel wants its brigades to be as ready as possible for future conflicts.

Israel is facing multiple challenges in preparing for potential upcoming conflicts on its northern border with Hezbollah and as it faces off against Hamas in Gaza and an Iranian missile and terror threat. The combination of all these adversaries, which Israel has faced in numerous past wars, has led Jerusalem to put in place a multi-year plan called Momentum. Part of the plan are new special units, more combined arms and the use of new technology to “digitize” the battlefield. A more digital battlefield, with networks and sensors and artificial intelligence and better systems for targeting, means soldiers can also train digitally to simulate wars.

Officers from Israel’s 401st armored brigade recently completed a unique training at the IDF’s Julis base using a technology developed by defense giant Elbit Systems. The system, called Brigade and Battlegroup Mission Training Center, is designed to replicate the issues officers will face on the real battlefield. This virtual training system means that an armored unit doesn’t need to drive all its tanks and engineering equipment out to the field, wasting man-hours and churning up dirt, but rather the officers can be put in cubicles to simulate the battlefield on screens. “We created a new world of simulation and can bring the soldiers, not all of them but most commanders from the battalions, to simulate the soldiers and tanks and armored personnel carriers,” says a Major in the armored corps.

While this might remind some of wargames like Call of Duty, the men who went through the training say it has aided the brigade to train for the decisions they would need to make on the battlefield. Compare this to massive maneuvers of the past, like the 1941 Louisiana Maneuvers in the United States that prepared soldiers for the Second World War and this is a radical change. However, simulators and sensors have gotten better over the years, enabling screens to not only provide the kind of image a tank commander would see, but also allow him to network with the air force, engineering units and others. The modern battlefield is full of units that tend to be using more computer screens and fewer people with binoculars, such as drone pilots, so in many ways, this kind of simulation borrows aspects of what soldiers are doing anyway.

The Major from the 401st, whose name is anonymous for security reasons, says that while his soldiers played the roles they would on the future battlefield, they faced off against ground forces from Israel’s Nahal brigade. “So we faced their battalion and we couldn’t figure out until the end what they will do. It was amazing and we learned from decision making and where to go, and the unit that trained us they provided us a lot of dilemmas that can effect the battle and how to figure them out.”

Although simulations have existed for armored brigades in the past, this exercise enabled the unit to drill down to the company and platoon commander levels. This enabled more training for the forward units that would be the tip of the spear in any future conflict with Hezbollah. In the 2006 war, the last time Israel faced off against Hezbollah in a large ground campaign, there were many setbacks for units due to communications confusion and also Hezbollah’s use of anti-tank Kornet missiles. There was a connection from top to bottom, so it is the first time the company commander and platoon can play the decision-makers level with the brigade. “What I can say is it doesn’t replace moving tanks and APCs on the ground, it helps us in the decision making levels and battalion and company and platoon commanders and the dilemmas in the battlefield,” says the Major from the 401st.

Tanks don’t fight wars on their own and 2020 is not like the period of the 1940s to 1960s when tank brigades would conduct massed assaults on enemy positions. Today tanks operate with infantry and a plethora of other units. Israel’s new Multi-Dimensional Unit, unique drone capabilities and 7th Wing air force special forces unit are all designed to leverage Israeli technology, communications and combined arms to deliver a knock-out bunch to an enemy like Hezbollah. With better air defense to provide an umbrella over the home front and a new satellite to aid with reconnaissance, as well as F-35s, this is all about integrating these forces better on the battlefield.

The 401st is looking to meeting these challenges with the flexibility provided by this kind of simulation training. In the last year, Israel has put several brigades through this new virtual training and will be putting more in the future. Speaking to a captain in the engineering unit of the same brigade provides an insight into other aspects of what the soldiers learned in the recent training.

“As the combat engineering company commander in the tactical level in the simulator, I get details and provide them to the battalion headquarters which builds a bigger picture of the enemy obstacles and [where] the enemy is hiding,” says the officer. “Now [the battlefield is] more like guerilla warfare and so everyone is looking for this enemy, they can see only a few details but the idea is to give the bigger picture.” What that means is that over several days of training using the same virtual village as the “enemy” obstacle while the soldiers learn the area and how to communicate better with their higher-ups.

The company’s 601st engineering battalion also had to enter buildings, designed like a kind of “escape room” with mock flags and enemy items in them to simulate the kinds of buildings they would have to enter in a village in a place like southern Lebanon. Images from these mock enemy rooms show uniforms and floors that look like they were dug up as well as communications equipment. Hezbollah is known to have festooned villages in southern Lebanon with tunnels and stockpiled munitions in civilian areas.

Israel and Hezbollah tensions rose after July 20 when Hezbollah claimed Israel killed one of its members in an airstrike in Syria. Israel has carried out more than 1,000 airstrikes in Syria against Iranian targets since the Syrian civil war broke out. This is because Iran transfers weapons to Hezbollah through Syria. Hezbollah has vowed to retaliate against Israel for the killing on July 20. There have been two incidents, one in northern Israel and one near the Golan Heights, where Israel says it thwarted threats. It was not clear if the Golan incident was linked to Hezbollah. However, on August 4, a massive explosion occurred in Beirut, leading to tensions being reduced as Lebanon focuses inward. Yet Israel has maintained a level of alert on the northern border. The training of the 401st is part of this wider context in which Israel wants its brigades to be as ready as possible for future conflicts and also prepared to put into practice the latest technology Israel has available.

This article first appeared last month and is reprinted due to reader interest.