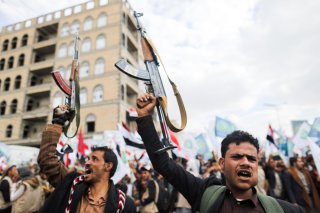 At least seven people have been killed in Yemen after Saudi Arabia conducted a series of airstrikes against the Houthi movement in retaliation for the group’s recent attack on an oil storage facility in Jeddah.

The Houthi attack, which the group stated had been carried out by an explosive-laden drone, was its most successful attack against Saudi Arabia since a 2019 drone attack on a Saudi Aramco facility that briefly halved the country’s oil production. Friday’s attack did not lead to any Saudi casualties, but destroyed the oil contained in the storage facility, creating an enormous conflagration that was captured on camera by bystanders and widely circulated on social media. Earlier in the week, the Houthis had also struck an oil refinery in the city of Yanbu, leading to a temporary reduction in Saudi oil output.

The Saudi air raids, which targeted the Houthi-controlled cities of Sana’a and Hodeidah, damaged a power plant and a fuel supply station occupied by the group. The Houthis also claimed on an allied media page that bombs had struck the offices of Yemen’s state-run social insurance agency, killing seven civilians and wounding three others.

Brig. Gen. Turki al-Maliki, the Saudi-led coalition’s main spokesman, told the press that Riyadh’s airstrikes had targeted “sources of threat” to the country, suggesting that they had targeted locations where the Houthis were thought to be assembling drones for use in future attacks. Al-Maliki claimed that the Houthis had been using civilian infrastructure, including Hodeidah’s vital port, as a base for rocket and drone launches. In addition to the Houthis’ successful strike on Jeddah, the spokesman noted that Saudi air defenses had shot down two additional drones that originated from Hodeidah on Saturday.

The attack on Jeddah came within hours of the start of the Saudi Arabia Grand Prix, the country’s first Formula One race, which took place around ten miles from the targeted facility. The race was held as scheduled.

Saudi Arabia intervened in Yemen’s civil war in 2015 to support the southern-based government of President Abdrabbuh Mansour Hadi. Despite Saudi Arabia’s vast military advantages over the Houthis, the group has continued fighting and has even advanced in some areas. Moreover, Hadi’s government has been undermined by the emergence of secessionist groups in Yemen’s south.

While the Houthis have agreed in principle to negotiations with the coalition mediated by the Gulf Cooperation Council (GCC), the group has rejected holding talks in Riyadh, where the GCC is headquartered, because of Saudi Arabia’s leading role in the coalition.