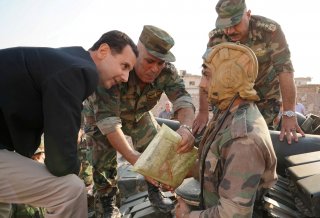 The Syrian Ministry of Defense released a statement on Thursday indicating that one of its soldiers had been killed in an Israeli missile strike against a telecommunications tower in Syria’s central Homs province.

Three other soldiers were injured in the strike, which occurred around midnight. Although Syrian air defenses were activated to stop the incoming missiles, they were unable to.

The airstrike is presumed to have been directed at Syria’s Iran-backed groups, some of which have taken up positions along the Israel-controlled Golan Heights, which border southwestern Syria. Israel has identified these groups as a critical terror threat against the Jewish state.

After the strike, an Iran-backed group within Syria issued a statement acknowledging that its base had been hit and vowing a “harsh response” against Israel and the United States, which it also accused of supporting the attack.

In keeping with its usual policy of refusing to confirm or deny its activities in Syria, Israel offered no comment on the strike. Since the onset of the Syrian Civil War in 2011, Tel Aviv has launched hundreds of strikes inside Syria, both against forces allied to Syrian dictator Bashar al-Assad and against the Islamic State terror group.

However, although these strikes have persisted for nearly a decade, they have intensified in recent months, as the Assad regime has strengthened its control over Syria. Another strike on October 8 targeted the same region, wounding six Syrian soldiers.

Assad, a member of Syria’s Shi’a Alawite ethnic minority, has drawn considerable support from Shi’a Iran throughout the country’s decade-long conflict. In addition to political and financial support, Tehran urged Hezbollah, its powerful client militia in Lebanon, to join the war on Assad’s side. It also dispatched hundreds of commanders in the nation’s Quds Force, which conducts military activity outside Iran, to Syria to help train and equip various Iran-allied militia groups.

Quds Force locations have long been a primary target for Israeli strikes, and a series of heightened clashes occurred in 2018 after Iranian militias fired rockets into the Golan Heights.