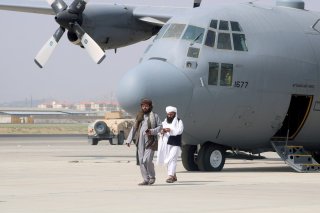 Speaking at a press conference with British Foreign Secretary Dominic Raab, the Qatari royal clarified that his nation intended to assist the Taliban for humanitarian purposes. Al Thani also indicated in his remarks that Qatar was seeking technical assistance from Turkey, another state that has managed to avoid hostility with the Taliban.

In the same press conference, Raab laid out the UK’s position on the Taliban, arguing that while London had no plans to recognize the group as Afghanistan’s legitimate government, it would continue to interact with it as needed to provide the best humanitarian outcome for the war-torn country.

Raab said that the United Kingdom would not recognize the Taliban “any time in the foreseeable future.” He also greeted Taliban public statements about the rights of women and religious minorities under the new government with skepticism, noting that the British government would judge the group based on its actions rather than its words.

Qatar has played a key role in the Afghan conflict. It has long maintained a relatively cordial relationship with the Taliban. While it was not one of the three nations—Pakistan, Saudi Arabia, and the United Arab Emirates—to recognize the group’s rule in the 1990s, it later served as a key hub for the group’s diplomacy. Qatar helped to mediate the 2015 prisoner exchange that freed Army Sgt. Bowe Bergdahl in exchange for five Taliban prisoners, and played host to the negotiations that led to the 2020 U.S.-Taliban peace agreement in Doha, Qatar’s capital.

The Kabul airport was significantly damaged during the evacuation. On August 26, a suicide bombing conducted by the Islamic State’s “Khorasan Province” (ISIS-K) killed 13 U.S. soldiers and nearly two hundred Afghans.

In spite of pressure from U.S. lawmakers to extend the Taliban’s withdrawal deadline of August 31, the U.S. evacuation was completed by that date—although several hundred Americans were left behind, as were thousands of Afghans who sought evacuation.

With the U.S. withdrawal complete, and the Taliban fully in control of thirty-three of Afghanistan’s thirty-four provinces, a humanitarian crisis seems imminent, with the United Nations issuing a warning that one-third of the country faces acute food shortages. In Kabul, food prices have risen sharply in the weeks since the Taliban takeover, and the country’s economy remains sluggish.