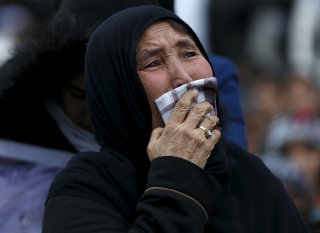 The report, published on Thursday, gave accounts from witnesses who described the killings as having taken place from July 4 to July 6 in the village of Mundarakht, a city within the district of Malistan. Some of the killings were summary executions, seemingly without any motive; at least three of the victims were tortured to death by Taliban militants.

The Hazara are the third largest ethnic group in Afghanistan and overwhelmingly consist of Shi’a Muslims that Sunni extremist groups such as the Taliban have regularly persecuted. The Hazara mostly live in central Afghanistan, a region that largely continued to resist the militant group even as the rest of the government-controlled territory collapsed to their rule.

During the Taliban’s rule over Afghanistan from 1996 to 2001, Hazaras were subjected to extreme repression, with several large-scale massacres perpetrated against the group by the Taliban, notably in the northern city of Mazar-i-Sharif in 1998.

The Taliban’s current leadership has emphasized that the group has moderated its stances over the past twenty years. In a press conference on Tuesday, August 17, Taliban spokesman Zabihullah Mujahid claimed that “When it comes to experience and maturity and vision, of course, there’s a huge difference between us, in comparison to twenty years ago. There will be a difference when it comes to the actions we’re going to take.”

But the Hazara report is a troubling suggestion that this is not the case. In addition to the massacres, the Taliban also took dynamite to a statue of Abdul Ali Mazari, a Hazara leader who fought against the rising Taliban in the 1990s and was murdered by the group in 1995, on Wednesday.

Agnes Callamard, the secretary-general of Amnesty International, strongly condemned the nine murders, describing them as “cold-blooded” and “a reminder of the Taliban’s past record.” Callamard underlined the threat that ethnic minorities continued to face from the Taliban and other militant groups, and expressed pessimism about the country’s future under their rule.