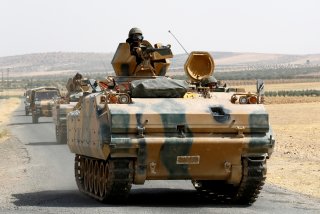 The Turkish Defense Ministry announced on Monday that four Turkish soldiers had been killed during a military operation in northern Iraq—a sign of growing hostility between Ankara and Kurdish forces within Iraq’s Kurdistan region.

The Defense Ministry’s statement claimed that the operation took place on Sunday night and was conducted as part of Operation Claw-Lock, the codename for the Turkish military intervention in northern Iraq that began in April. Turkey added that other operations under Claw-Lock remained ongoing elsewhere in northern Iraq.

Turkey has regularly launched small-scale military operations in Kurdistan over the past half-decade, seeking to degrade the capabilities of the Kurdistan Workers’ Party, a Kurdish political party and militant group in northern Iraq which has historically sought the independence of majority-Kurdish areas within Turkey. Since 1984, the PKK has fought an ongoing guerrilla war against Ankara, leading to tens of thousands of deaths. Consequently, the group has been designated a terrorist organization by most Western nations, including the United States and the United Kingdom.

Due to its opposition to the PKK, Turkey’s relationship with Kurdish groups in Syria and Iraq is largely antagonistic. Ankara has tended to view other Kurdish militant groups, including the People’s Protection Units (YPG) formed to combat the rise of the Islamic State (ISIS) terror group, as offshoots of the PKK and has also fought against them. However, this relationship has been complicated by the U.S. partnership with the YPG and other Kurdish defense groups during the campaign to contain ISIS, limiting Ankara’s ability to use military force against them. With ISIS largely defeated and the United States mostly withdrawn from Syria and Iraq, however, the Turkish government has indicated in recent months that it will launch a military intervention in Syria, although Russia and Iran have both discouraged Ankara from doing so in recent months.

The ongoing Turkish intervention in Iraq has also led to a deterioration in relations between Ankara and Baghdad, which has condemned Operation Claw-Lock and other Turkish operations in Iraqi Kurdistan as violations of its sovereignty. In July, the Iraqi government claimed that Turkish forces had “blatantly violated” Iraqi sovereignty after they allegedly attacked a resort in Iraq’s northern Duhok province, leaving eight dead. Ankara denied responsibility for the incident and claimed it had been a terrorist attack.