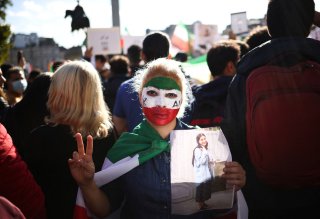 Back when I was in college, a beloved political science professor who studied social movements and revolutions would sometimes step into class and speak to us as though he were speaking to the world: “Just remember, the most important day of a protest movement is the day after the government starts shooting.”

In Iran, the government has been shooting—literally and metaphorically—for over a month.

The protests began after Iran’s “morality police” arrested a twenty-two-year-old woman, Mahsa Amini, for allegedly violating Iran’s rules requiring women to cover their hair with a hijab, returning her dead alongside reports of having beaten her head in. The government’s claim that Amini died of a heart attack while in police custody only added insult to injury, as Iranians everywhere understand that all too many arrested by police end up dying of such strange causes.

The first protests began in Saqqez, following Amini’s funeral, where women ripped off headscarves in an act of solidarity. Since, the protests have swelled, with women on the front lines across the country burning their headscarves, cutting their hair, and chanting slogans such as “woman, life, freedom” and “death to the dictator.” Schoolgirls have been demonstrating in playgrounds and on the streets. Men and teenage boys have joined the protests in large numbers, backing the women in their demands for greater freedom and an end to Iran’s theocratic regime.

Iranian police and security forces, most notably the infamous Islamic Revolutionary Guard Corps, have responded with the usual brutality. So far, according to Iran Human Rights, over 200 people have been killed, including twenty-four children and twenty-eight Iranian security officials. In Zahedan, the capital of Sistan-Baluchestan province, at least ninety-three people were slaughtered by security forces while leaving their Friday prayers.

In some ways, much of this might feel like a replay of the past. In 2009, millions in Iran’s major cities protested a presidential election, resulting in 4,000 arrests and roughly 100 deaths. More recently, security forces killed at least 100 people in November 2019, when primarily working-class contingents of the Iranian population turned out against economic hardship.

However, in other important ways—perhaps the most critical ways—these acts are far more revolutionary than past protests. There are five key reasons why.

First is the loss of fear, which is the ultimate source of authoritarian power. The reason the most important day of a protest movement is the one after the government starts killing people is that it is an assessment of the protesters’ resolve. Once a population sheds its fear of the ruling regime, it will continue to protest after the government starts killing. The Iranian people have continued on, sometimes galvanized by the deadly crackdown.

Second is the unique geographical nature of these protests. Contrary to past protests in Iran, which have often been localized in major cities, these protests exhibit a genuinely broad geographical scope. As the fall of former Serbian dictator Slobodan Milošević shows, civil resistance movements win when they unite the country geographically.

Third is the participation across social and economic classes. The protests in 2009 consisted primarily of middle-class individuals in Iran’s major cities, notably Tehran, turning out against the results of a presidential election. Major protests in 2017 and 2019, however, consisted of working-class neighborhoods protesting economic conditions. For the first time, the current protests appear to be genuinely cross-class, with even industrial workers and bazaar shopkeepers (typically strong constituencies of the regime) joining in. This demonstrates the increasing widespread intolerance of the ruling regime. Further, past examples, such as Poland’s Solidarity movement in the 1980s, suggest that cross-class unity is often a key factor in success.

Fourth is generational change. No matter the lengths authoritarian regimes will go to entrench their power, that power always rests, often in unseen ways, on shaky ground. This is because authoritarian order is built on fundamentally unjust terms that deny many groups participation in the broader social, political, and economic life of a country. Though it sometimes seems succeeding generations passively accept an institutional status quo, there are often tinderboxes scattered across authoritarian societies. This is even truer in the age of social media and virtual private networks (VPNs), which promote the exchange of ideas. Reporting right now suggests the average profile of a protestor is a fifteen-year-old girl. This is emblematic of sustained, cross-generational opposition to the ruling regime.

Fifth, and perhaps most importantly, is the participation and leading role of women. Chauvinistic male leaders regularly underestimate the power of women to challenge their rule. However, the participation of women in resistance movements is highly correlated with successful campaigns, a stronger commitment to nonviolent methods, and greater success in eliciting security force defection. When protests erupted across Belarus in August 2020 following a fraudulent presidential election, women sustained the movement long after many men had been taken off the streets. Though Lukashenka’s rule was not ended, it was the unforeseen participation of women that brought his regime its greatest challenge in thirty years.

Central to female participation is the ethical dilemma security forces face when being asked to physically confront, beat, arrest, and torture women. Such a dilemma led to additional restraint in Belarus. Reporting seems to confirm a similar trend in Iran, with security forces wearing down at the prospect of confronting women as they put their bodies on the front lines. As Afshon Ostovar, an associate professor at the Naval Postgraduate School, put it, “I don’t think that Iran’s military and security forces, as brutal as they can be, are prepared to be ready to be known as the murderers of Iran’s daughters… they have to kill a lot of women to get this extinguished, and they can’t kill them all.”

Taken together, these five factors—loss of fear, geography, cross-class participation, generational change, and the participation of women—are aligning in a way that spells real trouble for the Iranian regime. That said, the protest movement is still lacking in crucial areas.

First, the movement needs a strategy with clear, unified objectives. One of the great successes of these protests so far—that they are organic, dispersed, and difficult to quash—could also be the movement’s downfall as the regime tests new strategies to quell the opposition. Only a strategy attaching means to ends can stay multiple steps ahead of the government.

The second need is a plan for defection. The defection of security forces from the ruling regime is one of the most crucial moments in a civil resistance campaign, as it deprives a regime of its violent coercive power. Right now, military and police commanders in Iran are warning their rank-and-file that if they defect, the opposition will execute them when the system fails. Therefore, the opposition, as part of its strategy, must articulate a clear amnesty plan for security forces. It must also push nonviolent methods across the country, as nonviolence always leads to greater regime defection.

Third, the opposition needs a plan for Iran’s provinces and ethnic minorities. As mentioned, current protests are not confined to Tehran. However, many are protesting the ruling regime for different reasons. Iran’s minority groups, many of which are concentrated in border provinces far from Tehran, face unique hardships. As such, movement leaders must be fully inclusive of minorities and, at some point, develop an agreed-upon plan for the future of provinces that might, if the regime is toppled, seek self-rule.

Lastly, the opposition needs to develop a communications and organization strategy that finds creative ways to sidestep the government’s increasing use of internet blackouts, VPN restrictions, and restricted availability of social media. This will not be an easy task, but in order for this movement to enact change, it must be adequately networked.

One of the most difficult tasks for a social movement is corralling organic energy and outrage toward clearly defined ends. Doing so requires a strategy that targets a regime’s greatest weaknesses while mitigating the movement’s own.

As major solidarity protests crop up globally, many will be closely watching the fate of Iran. Despite great challenges, there exists a confluence of important factors that bode well for anti-regime activists in Iran—if those activists can seize on them. The Ayatollah and his clique will continue to repeat the usual self-serving lies: that all of this is an orchestrated plan by the United States and its allies to overthrow the government rather than an organic response to the regime’s brutality and oppression. If there were ever doubt, the realities on the ground clearly belie such authoritarian nostrums, as more and more Iranians from all walks of life turn out against the government.

Although the future of the Iranian regime will ultimately depend on how much courage, organization, and creativity those protesting can muster, the country itself has definitively taken one step towards its own liberation in that it has clearly and firmly said “no” once the government started shooting.

Alex Betley is currently an aerospace and defense consultant. Prior, he was an International Security Studies Civil Resistance Fellow at the Fletcher School of Law and Diplomacy, Tufts University.