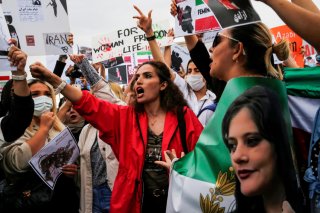 Mohammad Bagher Ghalibaf, the speaker of Iran’s Islamic Consultative Assembly parliament and the country’s third-most-powerful politician, urged Iranian security forces to use violent measures against demonstrators in the country’s ongoing protest movement, claiming that they endangered public order and threatened the foundation of the government.

In his speech, Ghalibaf claimed that while other demonstrations in Iran’s recent history had been aimed at addressing grievances within Iran’s existing system of government, the current wave of protests—sparked by the death of Mahsa Amini, a twenty-two-year-old Kurdish woman who was arrested and allegedly beaten to death for failing to properly wear a hijab—rejected them altogether.

“The important point of the [past] protests was that they were reform-seeking and not aimed at overthrowing [the Islamic Republic],” Ghalibaf said. The speaker urged Iranians who remained loyal to the overarching tenets of the country’s government to stay home: “I ask all who have any [grievance] not to allow their protest to turn into destabilizing and toppling [of the government].”

Iran’s ongoing protest movement, now in its third week, has spread to all of Iran’s major cities and hundreds of smaller towns throughout the country. The protests are thought to be the country’s largest and most significant since the failed 2009 Green Revolution, although they mark the latest in a series of steadily-growing protests across the country since late 2017. The circumstances of Amini’s arrest and death have galvanized opposition to Iran’s mandatory headscarf law, and hundreds of women have filmed themselves publicly burning the garment since the onset of the protests. Ghalibaf tacitly acknowledged in his remarks that security forces were responsible for Amini’s death, vowing to “amend the structures and methods of the morality police” to prevent future killings.

In response to the unrest, Iran’s security forces have launched a sweeping crackdown, and videos on social media have shown Iranian police and the paramilitary Basij militia using tear gas, water cannons, and live ammunition against protesters. Estimates of the death toll range from forty-one, the government’s official estimate, to more than 100. Iran Human Rights, a non-governmental organization based in Norway, claimed that forty people had been killed on Friday alone in Iran’s southeastern Zahedan, Sistan, and Baluchistan provinces. More than 1,500 Iranians are thought to have been arrested since the onset of the demonstrations, including at least one hundred over the weekend following a protest at Iran’s Sharif University campus.

A former officer of the Islamic Revolutionary Guard Corps (IRGC), Ghalibaf has long been regarded as one of Iran’s foremost conservative politicians. Before his term as parliament speaker, he served as mayor of Tehran from 2005 to 2017, succeeding former mayor Mahmoud Ahmadinejad after his election to the presidency. Ghalibaf also ran for president in 2005, 2013, and 2017, finishing second in 2013 but losing decisively to reformist Hassan Rouhani.