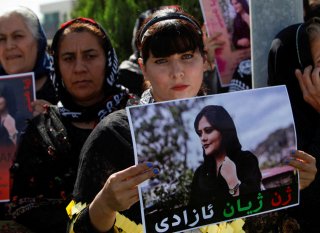 The UN Office of the High Commissioner for Human Rights (OHCHR) issued a statement on Tuesday condemning the Iranian government for its attempt to crack down on the growing protest movement by launching a nationwide internet blackout and violently dispersing demonstrations with live ammunition.

Ravina Shamdasani, a spokeswoman for the agency, stated that the organization was “very concerned by the continued violent response by security forces to protests in Iran, as well as communications restrictions affecting landline and mobile usage, the Internet and social media platforms.”

“We are extremely concerned by comments by some leaders vilifying protesters, and by the apparent unnecessary and disproportionate use of force against protesters,” she continued. “Firearms must never be used simply to disperse an assembly. In the context of assemblies, they should only be used in cases of an imminent threat to life or of serious injury”—a criterion that the statement argued had not been met in most cases.

The OHCHR statement insisted that the Iranian government’s response to the protest “undermines numerous human rights, notably the right to freedom of expression. … We call on the authorities to fully restore Internet access.”

Over the past two weeks, protests have spread across Iran following the death of Mahsa Amini, a twenty-two-year-old Kurdish woman who was arrested by the Iranian morality police for failing to wear a headscarf in accordance with government guidelines. During her captivity, Amini abruptly suffered a serious health condition, leading to her hospitalization. Although Iranian state media has claimed that she suffered a heart attack while in custody, her family has dismissed this, and others who were held with her claimed that she was beaten by the police, leading to a severe brain injury. Three days after her arrest, Amini died in a hospital in Tehran, sparking the protests; they have since spread across the country to more than 150 cities, according to foreign opposition groups.

In the first days of the protests, images and videos circulated widely on social media of protesters dancing, burning headscarves, destroying symbols of the clerical government, and clashing with Iranian security forces. At least seventy-six people have been killed in the violence, although the OHCHR statement noted that the precise number was difficult to confirm “due in part to restrictions on telecommunications.” More than 1,200 protesters have been arrested, including the daughter of former regime stalwart Akbar Hashemi Rafsanjani, according to Iran’s state-aligned Tasnim News Agency.

The protests within Iran have also sparked popular anger against the Iranian government around the world, and demonstrations outside Iranian embassies have occurred in several other countries.