Iran Shuts Down the Internet in the Face of Growing Unrest 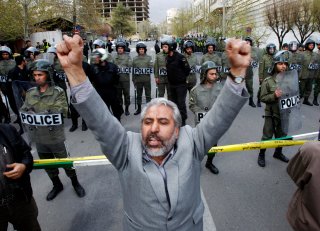 The government of Iran launched a total internet blackout across the country on Wednesday, as anti-government demonstrations continue to grow over the death of a young woman in the custody of Iran’s religious police. This week’s demonstrations mark the most recent episode in a wave of Iranian protests dating back to 2017.

An Iranian official had previously indicated that the step might be taken out of a desire to preserve security, according to the Associated Press. Shutting down internet access—a step that Tehran has taken in the past—will likely make it more difficult for Iranians to organize gatherings, share information about government activities, and upload videos of the protests to social media networks.

The country’s telecommunications minister, Isa Zarepour, indirectly referenced the blackouts on Wednesday morning, claiming that internet access could be restricted “due to security issues” without elaborating. Prior to the blackout, the country also blocked access to social media and messaging services, including Instagram and WhatsApp, which had both been used to organize protests. Other social media services, including the major platforms Facebook and Twitter, have been banned in Iran for several years, although many Iranians are able to access them through virtual private networks, or VPNs.

Iran’s protests began last week after Mahsa Amini, a twenty-two-year-old Kurdish woman from Iran’s northwestern Kurdistan province, was arrested for failing to wear a headscarf in accordance with the government’s requirements. While in custody, Amini’s health deteriorated, allegedly from a beating she received from the religious police; she died three days later in a hospital in Tehran.

Although Iran’s Interior Ministry has described her death as “unfortunate,” it has refused to take responsibility, claiming that the religious police did not harm her and insisting that she suffered a heart attack while in custody. Alimi’s parents denied the government’s claims, saying that she had been healthy prior to her arrest.

Videos from the protests circulated widely on social media, depicting crowds of young Iranians confronting police officers and symbols of the ruling authorities throughout the country. Protesters chanted “Death to the dictator,” referring to Supreme Leader Ali Khamenei, and “I will kill the one who killed my sister,” according to Iran’s government-aligned Fars news agency.

Iranian police and security forces, including the Basij militia within the Islamic Revolutionary Guard Corps (IRGC), responded violently to the protests. Police fired tear gas, water cannons, and shotguns into the crowds. Amnesty International reported on Wednesday that the death toll from the protests had risen to eight, and hundreds more had been wounded. So far, Iranian government officials have only acknowledged three deaths, which they insist were caused by other protesters.