Mahsa Amini’s Parents Speak Out as Iran Protests Rage On 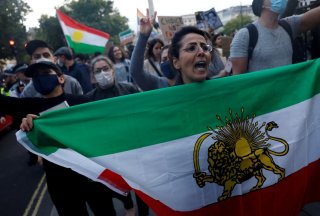 The family of twenty-two-year-old Mahsa Amini—who died under suspicious circumstances on September 16 shortly after her detention by Iran’s morality police—has blamed her death on the Iranian security services and offered support for the country’s growing protest movement.

The Iranian morality police initially arrested Amini for failing to wear her headscarf properly, a crime under the Islamic Republic’s law code. They initially claimed that Amini had suffered a heart attack while in custody and had been transferred to a hospital in Tehran three days later, where she had died. However, Amini’s father swiftly denied the government’s statement, claiming that she had been severely beaten by the morality police while in custody.

The protests started immediately after Amini’s death in Iran’s northwestern Kurdistan province, particularly in her hometown of Saqqez. However, the unrest quickly spread across the country; demonstrations have now occurred in as many as 150 cities nationwide, and at least seventy-six protesters have been killed by security forces, according to human rights watchdogs. These numbers are likely underestimates, as internet access within Iran has been heavily restricted since the onset of the protests. Local sources have also reported that the government has threatened the victims' families with legal action if they publicized their deaths, making it more difficult to establish an accurate casualty count.

The demonstrations in Iran are the country’s most severe since November 2019, when an increase in gas prices led to a similar wave of protests. In the ensuing crackdown, around 1,500 Iranians are thought to have been killed by security forces, according to international news outlets, human rights organizations, and opposition groups outside Iran.

Iran’s government has accused the West of inciting the protests, particularly the United States. Iran’s foreign ministry summoned the British ambassador to Tehran over the weekend to file an official diplomatic complaint, objecting to Britain’s hosting of three Persian-language satellite television networks supporting the protest. The Norwegian ambassador was summoned the same day to explain remarks in favor of the protests made by Masud Gharahkhani, the country’s Iranian-born parliament speaker.

Since the onset of the protests, the Iranian government has condemned them as violent disturbances against public safety and urged Iranians not to attend them. Tehran has also attempted to organize pro-government demonstrations to counter the anti-government ones, with unclear success.