Trying to Turn NATO Into NATOME: A Trump Administration Adventure 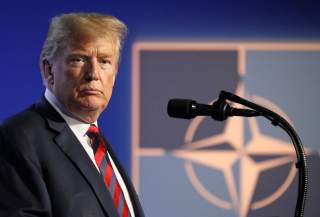 Secretary of State Mike Pompeo made a flurry of phone calls over the weekend in support of President Donald Trump’s call to turn the North Atlantic Treaty Organization into “NATOME,” adding two letters for “the Middle East.”

Trump has been a longtime critic of NATO, a Cold War-era pact that commits the United States and Canada to defend Europe from Russian aggression. He has previously complained that NATO is an unfair arrangement for the United States, and reportedly considered pulling out of the alliance several times in 2018, as he saw it as pointless. But despite his critiques, he now seems to support an expanded role for the alliance as his administration struggles to balance deteriorating relations with Iraq and the threat of war with Iran.

Fractures in the trans-Atlantic relationship, however, make a joint mission in the Middle East a tough sell.

Trump’s call for a NATO with a Middle East focus during a January 8 press conference came on the heels of the U.S. assassination of Iranian Maj. Gen. Qassim Suleimani in Iraq, which occurred on January 3 and heightened tensions. In the aftermath of the drone-strike assassination, NATO suspended its training mission for counter-ISIS forces in Iraq, a decision that coincided with the Iraqi parliament’s push to expel foreign forces. Iranian leaders promised “hard revenge” and fired over a dozen ballistic missiles at U.S. forces in Iraq on January 7, but no one was killed.

“NATO, right, and then you have ME, Middle East. They would call it NATOME,” the President told reporters on January 9. “I’m good at names, right? What a beautiful name, NATOME.”

The State Department rushed to turn Trump’s words into action over the weekend. NATO Secretary General Jens Stoltenberg and Pompeo “agreed NATO could contribute more to regional security and the fight against international terrorism” during a January 9 phone call, according to readouts published by both the U.S. State Department and NATO headquarters.

Pompeo made seven more calls to European or NATO countries related to the Middle East and Iran, from January 9 to January 12, according to U.S. State Department statements.

He told his Canadian counterpart, Foreign Minister François‑Philippe Champagne, that “an expanded NATO force in Iraq” could be a way to “contain” the “aggressive and destabilizing” influence of Iran, according to a U.S. statement on January 10. Champagne “emphasized the need for a de-escalation in tensions,” according to a Canadian statement, which did not mention the NATO proposal.

Pompeo also called the foreign ministers of Britain, the European Union, Estonia, and France to discuss Iran and Iraq that weekend.

EU High Representative and Vice President Josep Borrell talked with Pompeo about “Iran’s destabilizing role” in the Middle East, according to a U.S. statement on the call, but the EU readout of the call did not mention Iran.

French Embassy press counselor Mélanie Rosselet told the National Interest that she was not aware of any public readouts published by the French side, and the British Embassy did not respond to a request for comment.

“Foreign Minister Urmas Reinsalu affirmed his colleague Mike Pompeo that Estonia supported the United States, and underscored the United States had a right to self-defence according to the UN Charter,” a statement by the Foreign Ministry of Estonia stated. “According to Reinsalu, it was crucial to prevent Iran from becoming a nuclear power and stop the development of its missile programme. The cooperation of Atlantic allies is vital in this issue.”

Undersecretary of State for Political Affairs David Hale also joined the EU Political Directors’ conference on January 10 by video call “to discuss global issues, including the situation in Iraq and Iran.”

Jordan’s King Abdullah II bin Al-Hussein, one of America’s key partners along the border of Iraq, is attending a whirlwind of meetings across Europe this week.

“Instability in our part of the world affects Europe and the rest of the globe, and so I think that a lot of our discussions will be centered on Iran, but mainly around Iraq,” the king told France24 on January 13. “This trip to Europe comes at the right time, where we need to talk about how do we talk to each other with maturity and respect, as opposed to rhetoric that could create a problem that takes us to the brink.”

He plans to visit NATO headquarters on January 14.

Pompeo ended the weekend with a Sunday night call to Turkish Foreign Minister Mevlüt Çavuşoğlu and “reiterated the need for NATO to play a greater role in the region and stressed the U.S. commitment to the UN-facilitated peace process in Syria.”

Turkey has the second-largest army in NATO and borders Iran and Iraq as well as Syria.

U.S. relations with Turkey have been strained over U.S. support for Kurdish-led forces in northeast Syria, which the Turkish government sees as an extension of the Kurdish separatist movement inside Turkey. Trump allowed Turkish forces to invade Syria in October 2019 as his State Department pushed for a closer relationship with Turkish-backed Islamist rebels in the country in order to counter Iranian influence.

The U.S. readout of the call did not make it clear how Turkey reacted to Pompeo’s proposals, or what was discussed during Special Envoy Amb. James Jeffrey’s visit to Turkey that same weekend. But a video of Jeffrey speaking on the phone while waiting in İstanbul’s airport, captured by Turkish state television news reporter Adnan Nawaz, hints at a deeper Turkish involvement in U.S. policy in the Middle East.

The State Department’s Bureau of Near Eastern Affairs refused to “confirm or deny purported telephone conversations in an airport,” and the Turkish Embassy in Washington did not respond to a request for comment.

Trump is also asking European countries to join a U.S. campaign of “maximum pressure” against Iran—but that may be an even harder sell.

The Joint Comprehensive Plan of Action (JCPoA) removes international economic sanctions on Iran in exchange for the ability to inspect and regulate the Iranian nuclear program. Iran signed the deal with six world powers in 2015, but Trump withdrew the United States and began to impose harsh sanctions on the Iranian economy in 2018.

European countries are working on a mechanism called INSTEX that would allow Iran to avoid U.S. sanctions for “humanitarian” trade. Treasury Secretary Steve Mnuchin threatened to put “secondary sanctions” on INSTEX during a January 10 press conference.

Iran has responded by removing all “operational limits” on its nuclear program. European countries have been reluctant to exit the deal and lose access for international inspectors.

Pompeo issued a twelve-point ultimatum to Iran in May 2018 that included an end to Iranian support for militias across the region and the Iranian ballistic missile program. Stoltenberg echoed his rhetoric in a press conference this week.

“For years, all allies have expressed concern about Iran’s destabilizing activities in the wider Middle East region,” Stoltenberg told reporters on January 13. “We agree Iran must never acquire a nuclear weapon, we share concern about Iran’s missile tests, and we are united in condemning Iran’s support for a variety of different terrorist groups.“

But actually leaving the nuclear deal would be a harder sell.

“The very defective JCPOA expires shortly anyway, and gives Iran a clear and quick path to nuclear breakout,” Trump said on January 8. “The time has come for the United Kingdom, Germany, France, Russia, and China to recognize this reality.”

The president proposed that the six world powers “all work together toward making a deal with Iran that makes the world a safer and more peaceful place.”

France, Britain, and Germany disagreed. All three countries released a joint statement on January 12 reaffirming their commitment to “upholding the nuclear non-proliferation regime.”

“We reserve recourse to all the provisions of the JCPoA to preserve it and to resolve the issues related to Iran’s implementation of its JCPoA commitments within its framework,” the statement said. “Despite increasingly difficult circumstances, we have worked hard to preserve the agreement.”

French president Emmanuel Macron drove the point home the next day when he repeated France’s commitment in a phone call with Russian president Vladimir Putin.